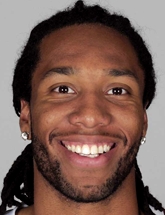 During the week, I've talked about how good of a player Larry Fitzgerald is and the dangers he poses to our secondary. Could it possibly be that in the end, he won't even play though?

Receiver Larry Fitzgerald was limited again Friday at practice with a sore groin, and Whisenhunt will list his Pro Bowl-bound wideout as questionable for Sunday.

"It will be a work-him-out-before-the-game-and-see-how-he is," Whisenhunt said. "But he is definitely feeling better."

The Cardinals were without Anquan Boldin for a stretch earlier this season, so they aren't going to be reluctant to sit one of their star receivers if they don't feel he's ready to go. What may be more alarming is that the Cardinals signed wide receiver Jamaica Rector from their practice squad today. He will likely play on special teams, but the sole fact that they signed another receiver may mean that someone lower on the depth chart, like Sean Morey, could receive a bump in playing time.

If Fitzgerald is out, slot receiver Bryant Johnson would start in his place. Because Fitzgerald's status was made more of an issue closer to gameday, I have to wonder if this will be one of those cases where a big-time player is inactive on gameday despite not much press surrounding him. Without Fitzgerald playing though, Brandon McDonald's job wouldn't necessarily get easier in three-receiver sets. He may be forced to cover Boldin most of the game rather than Johnson, depending on how the Cardinals would handle the situation.