Share All sharing options for: Crennel's Faith in Anderson Leads to Browns' 20-12 Win Over Bengals

Yippie...I finally get to do more of an upbeat review after a game. After failing to reach expectations over the first three weeks of the season, the Browns finally saw a glimpse of their offensive mojo from last season. It may have taken 15 quarters to see it, but it was certainly back in quarter number 16. We needed something positive heading into the bye week and before our Monday Night Football game against the New York Giants. Mission accomplished.

This week, I get to award some game balls first as opposed to starting off with the goats...

DB Mike Adams had an interception and a fumble recovery against the Bengals.

Goats of the Game (Troubling Performances Don't Pay Off) 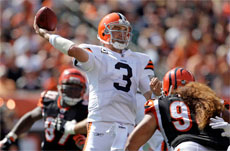 QB Derek Anderson played bad enough in the first half and early third quarter to be benched, but Romeo Crennel kept sending him back onto the field. 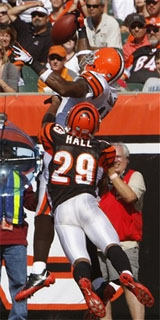 I never thought I'd be saying this: WR Braylon Edwards has his first touchdown reception of the season...in Week 4.

LB Alex Hall has provided good reason for excitement over the past two weeks. Here, he forces a game-clinching fumble.

A win is a win. The next step is looking good in victory. You can't expect that to happen against the New York Giants, but you can certainly prepare for it to happen. With several players slated to return from injury, if this Browns football team is in sync in all aspects of the game, there is no reason we can't be in the game until the final whistle.