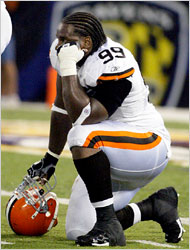 During the week, Cleveland Browns defensive end Corey Williams stated that New York Giants running back Brandon Jacobs can indeed be stopped, providing a little bit of bulletin board material as Jacobs responded.

I asked John Woods of the New York Times' Fifth Down Blog what his take was on this matter:

Question: "Corey Williams was on the Green Bay Packers team that held Brandon Jacobs to 67 yards in the postseason last year. Williams was quoted this week as saying, "You have to come out and hit him [Jacobs] in the mouth early. That way he gets tentative later on. We need to do that Monday night." Jacobs then responded with non-direct, yet direct jabs back at Williams.

How do you expect the physical Jacobs to fare against a massive front including Shaun Rogers and Corey Williams? Which team, if any, will the "bulletin-board material" benefit more, considering the Browns need to do something to get the ball rolling, but the Giants are used to this sort of thing?"

Woods: "The thing is, the Giants seem to be on a roll, and not just on the field: I think their morale must be at a record high. The Plaxico Burress story (where the team suspended him for missing a Monday workout) seemed to have no effect in the locker room, and that's in New York where the media is thirsty for player-on-player crime. So when the Browns' Corey Williams says something like Brandon Jacobs is going to be tentative when confronted by a physical front four on defense, I think it's poor strategy on his part.

For one thing, Jacobs is a physical runner. For better or for worse, that's his game. What Williams said is probably the kind of pregame talk Jacobs, and his offensive line, wants to hear.

For another thing, the Giants' rushing game seems fairly solid. Last week, it went up against a Seahawks' defense that had held Marshawn Lynch, Frank Gore and Steven Jackson all well under 100 yards apiece. Jacobs rushed for 136, with two scores. All three of the Giants tailbacks who played in that game averaged better than 5 yards a carry and had at least one gain of 20 yards or more. Now, I am not saying the Giants are unstoppable, but their success on the ground so far is probably not a fluke.

Finally, even if Williams is right, and Jacobs is a panty-waisted Nancy Boy who is going to be cowed by some solid knocks to the head, the Giants have like-minded runners to replace him, including Ahmad Bradshaw, who led the Giants in rushing in the playoffs last seson.

So, I think Williams's comments probably play into the Giants' hands a little, though sometimes I think pro athletes are so removed from real life that bulletin-board stuff just doesn't matter to them. No matter what happens, Jacobs will still drive home in his giant S.U.V. Anyway, it's probably more important, I think, for the Browns to score a few points than to get into Jacobs's head."

I'd like to thank John for taking the time to answer my question. Tomorrow morning, I will have a prediction blurb of this week's game on the Times' Fifth-Down Blog, so stay tuned for that.