Share All sharing options for: Champs for a Night: Browns Stun Giants 35-14

On September 28th, 2008, the Browns picked up their first victory over the season. That came against arguably the worst team in football, the 0-6 Cincinnati Bengals.

On October 13th, 2008, after a long bye week, the Browns picked up their second victory of the season. This time, it came against the undefeated and defending  Super Bowl Champion New York Giants.

I was extremely fortunate to have witnessed the game in person. Although the stadium was jam-packed, I can't help by chuckle at the fans who, before the game, stated that they would not be attending (in fear of seeing the Browns getting blown out). Who could've blamed them though? Since returning to the league in 1999, the Browns have rarely beaten the Pittsburgh Steelers, and we have never defeated "the team to beat" during the regular season. We finally accomplished that.

This week, I'm going to do things a little different in reviewing the game. Because there were so many positives, I'm giving out more game balls than usual, and I'm cutting out the goats of the game altogether. Any negatives will be addressed in my general comments section. 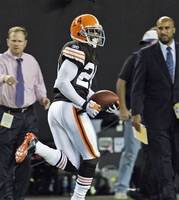 DB Eric Wright's interception for a touchdown sealed the game. 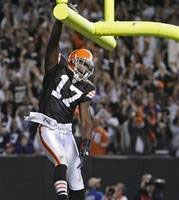 WR Braylon Edwards can celebrate now: he finally looked like the Pro Bowl receiver he was last season. 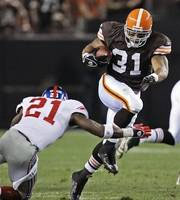 RB Jamal Lewis knows how to make defenders miss, as he runs through DB Kenny Phillips. 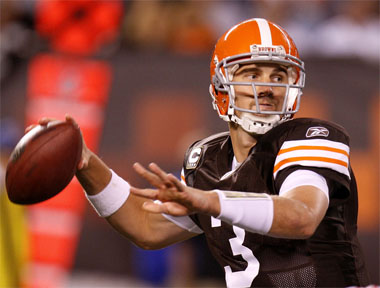 QB Derek Anderson has silenced critics for another week.

Against the Bengals, I closed the recap by saying the following:

"A win is a win. The next step is looking good in victory. You can't expect that to happen against the New York Giants, but you can certainly prepare for it to happen. With several players slated to return from injury, if this Browns football team is in sync in all aspects of the game, there is no reason we can't be in the game until the final whistle."

We didn't expect it to happen, but based on what everyone across the country saw, we certainly prepared for it. It paid off.