Sizing Up the Browns' Injuries: Who's Ready, Who's Not

Share All sharing options for: Sizing Up the Browns' Injuries: Who's Ready, Who's Not

The Browns aren't out of things just yet. We're only two games out of the division lead with 12 more games to play. That's a lot of time to make up a lot of ground, but the only way we're going to have a chance to pull things together is if the team is healthy. Last season, much of our success depended on all of our top players being available when we needed them most.

Some of them will be close to 100% when we face the Giants in 11 days. Others won't be near that percentage, but at least they'll make their return to the field. Here is a report on how things are going for players who have been out: 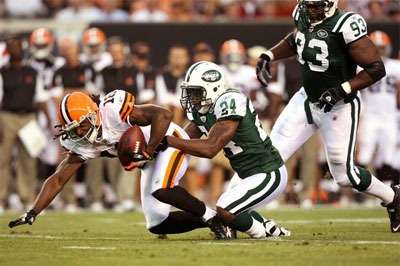 Altogether, the news is positive on the injury front.

I saw a quote from head coach Romeo Crennel over on the OBR that made me laugh. Maybe I'm just confused as to what he's trying to refer to:

Crennel said Anderson might need to go back to taking what the defense gives him, like he did in 2007.

"He might be trying to go down field a little more than he did last year," Crennel said. "He seemed to take more what the defense gave him last year."

Finally, remember the apparent Anderson/Edwards/Lewis love-fest on the sidelines during the Bengals' game? According to Anderson, the confrontation wasn't a negative one, reports the Chronicle-Telegram:

Despite television evidence to the contrary, Anderson disputed that any incident occurred.

"There was no argument whatsoever," he said Wednesday. "I just mentioned to him about being smart, getting the personal foul.

"He and I were talking. He wasn’t yelling at me, nothing was going on. Jamal happened to come over and we were in the process of getting the whole offense together. It looked like we were arguing and he grabbed a hold of us, which wasn’t the case."

They probably could've exchanged punches on television and would've stuck with the same story.