After Sunday's loss to the Washington Redskins, clearly there is only one man to blame: Phil Dawson. Only kidding, of course, as it was clearly the underachieving offense that cost us yet another football game.

Just think about that -- the Browns, potential-wise, are supposed to have one of the best offenses in football.

We held one of the AFC's best teams, Pittsburgh, to just 10 points. Result? Loss.

We held one of the NFC's best teams, Washington, to just 14 points. Result? Loss.

This week, it wasn't the playcalling that was the problem. The adjustments that Rob Chudzinski has made over the past several weeks were still on display. However, if you can't even execute a screen pass to a receiver at the line of scrimmage, you can't move the chains to set up the remainder of your gameplan as a coordinator. The goats of the game this week are back again, and although a major case can be made for two of our players on offense getting the award, I'm going to substitute one of them for a defensive player. 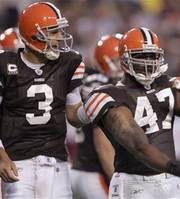 "We're only tugging onto each other because we couldn't hear the play call from the sideline!" 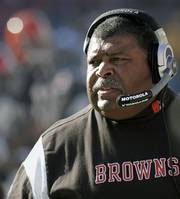 "1/8 from the one-yard line is a high percentage in my book. So much, that I won't throw the red challenge flag." 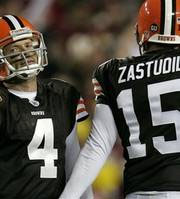 Believe it or not, the Redskins game was losable. It kills me that we didn't seize the advantage and get back to .500, but we still showed that we can compete with a very good football team, even on the road, until the final seconds.

The bigger game comes this week against the Jacksonville Jaguars. Why were we left out of the postseason last year? Because we had a horrible conference record in comparison to Tennessee.

Right now, we're only one game back of a tie for the wildcard. One game! That is no reason to give up hope. The Jaguars will be competing for one of those wildcard spots though, so if we can take them out this weekend, that will be a huge step forward in getting our season back on track.