Ignoring the Ravens game in which Anderson skewed the number of points our defense allowed, these are the point totals we've given up as of late: 10 points (Pittsburgh), 12 points (Cincinnati), 14 points (New York Giants), 14 points (Washington), and 17 points (Jacksonville).

Most importantly, we've exceeded expectations because of one player -- Shaun Rogers. He'll most certainly kick off the game balls this week after the type of game he had...

Awarding Game Balls (It Means They Did Good!) 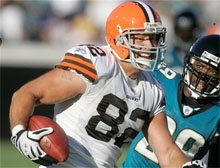 Goats of the Game (Failed Efforts in Victory) 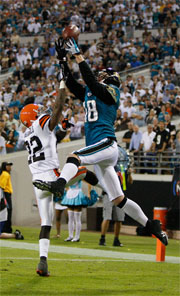 If WR Matt Jones had come down with this catch, our wildcard hopes would have instantly taken a massive hit.

At 3-4 with a division game this week against the Baltimore Ravens, the Browns are back on the right track. The margin for error is still very slim though, and with two games in a span of five days coming up, it'll be critical that Derek Anderson is on the top of his game. That's taking a leap of faith, but Crennel isn't going to make a change during that stretch. We'll either be 5-4, 4-5, or 3-6 when it's all said and done. Anderson can survive the first two records, but not the third.