Browns Depending on Home Crowd in Battle With Ravens

Share All sharing options for: Browns Depending on Home Crowd in Battle With Ravens 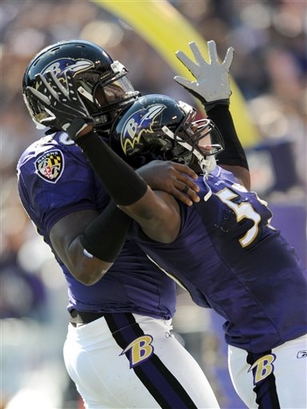 Did you hear? This Sunday...

All of those are guarantees -- at least, in the minds of some Ravens fans. There are a few things that our beloved rivals in Baltimore are forgetting: this game will be played in Cleveland, this is Week 9 of the National Football League (and not Week 3), and the Ravens are not a great football team.

That's not to say the Browns are a great football team. Overall, at this point of the season, the Browns have underachieved and the Ravens have already surpassed my expectations. The Ravens' defense deserves credit for returning to old form, and their offense deserves credit for making plays when needed with a rookie quarterback under center. When you're comparing the strengths of one team versus another, to say that this should be a blowout for the road team on any particular Sunday would have to be nothing more than a fan's bias taking over to the extreme.

Last season, Derek Anderson threw five touchdowns and one interception in a home blowout victory over the Cincinnati Bengals. When he faced the Bengals later in the season on the road, he threw two touchdowns and four interceptions, with two of them basically being taken back for touchdowns.

Home games can make a world of a difference.

The Browns started this season off shaky at home, but it is not a fluke when you rip apart the New York Giants -- that means you at least have some of your home "mojo" back. This season, the Ravens are 1-2 on the road. Most notably, they were blown out by the Indianapolis Colts 31-3 a few weeks ago. They were able to build some positive momentum on the road two weeks ago though, as they defeated the Miami Dolphins 27-13.

The implications surrounding this game are huge for both teams. Whichever team wins will definitely be ahead of the other one in the division race, and the winner would also have the potential of claiming the sixth seed in the AFC through nine weeks. Of course, more is on the line for the Browns. Getting swept by any division team virtually wipes out any hopes of a division crown, and we'd also fall behind a pack of seven-eight teams in the wildcard hunt.

Last week, it was do-or-die time on the road against a Jacksonville Jaguars team that I would consider to be on the same level as the Ravens, and we defeated them. If we bring that same intensity this week and are able to feed off the home crowd like we did against the Giants, there is no reason the Browns can't come away with a victory.