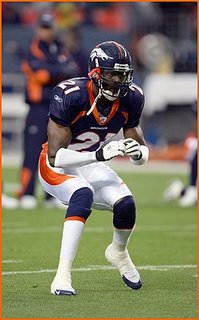 According to the Denver Post, former Broncos safety Hamza Abdullah is the newest member of the Cleveland Browns. Abdullah started the final eight games of the season for the Broncos last year, and was expected to compete for a starting role this season.

However, after suffering a groin injury, he lost his starting job. He originally made the team's 53-man roster, but played sparingly the first couple of weeks before being released two weeks ago. The signing adds more depth to the secondary while starter Sean Jones remains sidelined. I'd encourage all of you to head on over to Mile High Report to check out some of their fans' reactions two weeks ago when Abdullah was cut.

The signing also has to be an indication that Donte Stallworth is officially healthy. The team waived receiver Steve Sanders in signing Abdullah. In the end, we have the same number of healthy receivers, and one extra safety.