Share All sharing options for: Not a Blizzard, But Still a Win: Browns Beat Bills, 29-27

The Browns won for the third time in their past four road games, taking out the wildcard-contending Buffalo Bills 29-27 on Monday Night Football. It was our second Monday Night victory of the season in two attempts -- we have one more in December against the Philadelphia Eagles.

I think that overall, when you look at the state of the team, we are a better football team than last season. Looking at our schedule heading into the season, we feared that despite being better, we'd have a worse record. We do have a worse record at this point (4-6), but it's not because of the competition. We've defeated the defending Super Bowl Champion New York Giants. We've defeated two potential playoff teams in Buffalo and Jacksonville. And, we dominated the Denver Broncos and Baltimore Ravens -- two teams with great records -- until making team history with collapses.

The odds aren't in our favor now, but we still love Cleveland Browns football, and our team gave us another wild one against Buffalo. Let's get started with the game balls for Week 11... 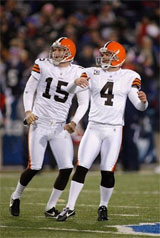 K Phil Dawson kicked a tremendous game for the second year in a row versus the Buffalo Bills.

Goats of the Game (Could Have Cost Us) 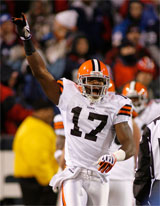 WR Braylon Edwards can celebrate another aspect: he had several nice blocks down the field. 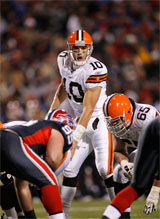 QB Brady Quinn may have been pressured, but he wasn't flustered. 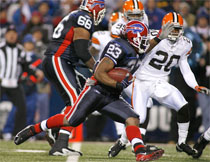 The defense was horrible again in the fourth quarter, meaning our "rotations" didn't really keep people any fresher. In the end, the "W" is what matters, and Brady Quinn has improved to a .500 record at 1-1. This is the third straight game that we should have blown out the competition based on how we started the games; maybe we can do that this Sunday against the Texans. Thank goodness for a regular Sunday 1:00 PM game too -- I've missed those.