Brady Quinn Has Fracture on Finger

Share All sharing options for: Brady Quinn Has Fracture on Finger 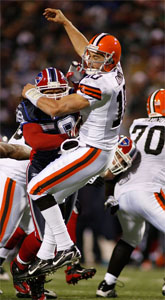 Cleveland Browns QB Brady Quinn suffered a small fracture on the tip of his index finger, according to the Akron Beacon Journal and various other sources. The injury occurred during Monday's game against the Buffalo Bills, when Quinn's finger came into contact with the helmet of a Bills defender.

So, the good news is that he will start this week against the Houston Texans. The bad news? If he takes a shot on his hand in the wrong spot again, we could see Derek Anderson come in the game in relief.

"If he gets hit again there's a possibility of more damage. We'll have to monitor it to see," Crennel said. "If it gets worse he may have to wear the splint all the time or we might have to sit him."

What's wrong? You knew there would never be an "end" to the quarterback dramas in Cleveland.