Quinn's Last Start a Forgetful One in 16-6 Loss

Share All sharing options for: Quinn's Last Start a Forgetful One in 16-6 Loss

Maybe Brady Quinn shouldn't have played after all against the Houston Texans. After the game, it was revealed that due to playing and practicing with a fractured finger, his injury had worsened to the point where he will miss the remainder of the season.

Even with Quinn's injury, it wasn't a legitimate excuse for the egg the Browns laid against the Texans. For the first time this season, I didn't feel depressed after the game -- I just felt empty. That's a telling sign when you know the season is over.

Let's get started with the goats of the game for Week 12, and there was one player who was especially deserving of one...

Goats of the Game (Hang Your Head) 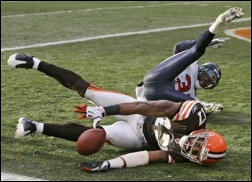 WR Braylon Edwards cannot hang on to a pass in the end zone from QB Derek Anderson. The catch would've made it a 16-13 game with enough time left to play. 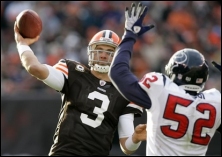 If you were frustrated by the Browns' effort this season, here is some good news: you'll get to watch Derek Anderson for the rest of the season! 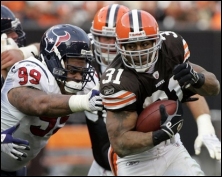 The Browns should have run the ball more with Jamal Lewis, if for nothing more than to take pressure off of Quinn.

The game was a dud, plain and simple. I tried to avoid talking too much about Romeo Crennel's decisions in this game, because it's obvious that what he did was just as bad as what Andy Reid did with Donovan McNabb against the Baltimore Ravens.

Against Indianapolis, we'll be facing one of the hottest teams in the AFC. We've only won one game at home this year, but it's not time to throw the towel in. We defeated Peyton Manning's brother, Eli Manning, and the New York Giants earlier this year, proving that wonders can happen on any given Sunday (unless you're the Detroit Lions). Also, I haven't forgotten about last season. And neither should you have. What needs to be in store this Sunday for the Browns?