Revenge in Store Against the Indianapolis Colts

Share All sharing options for: Revenge in Store Against the Indianapolis Colts

Oh, you thought something changed since 11 months ago? Think again.

On January 2, 2008, several days after the 2007-2008 regular season ended, I circled this Sunday's date on my calendar: a shot at the Indianapolis Colts.

It's no secret that I am a fan of the Indianapolis Colts, when you consider NFL teams that I like besides the Cleveland Browns. Most, if not all of that, has to do with how "cool" Peyton Manning operates at the quarterback position. In turn, he makes the rest of the Colts "cool" in my mind. Heading into Week 17 last season, all the Browns needed was for the Colts to defeat an offensively-challenged Tennessee Titans team, and we would've made the playoffs.

The Colts played Jim Sorgi most of the game. Tony Dungy conceded to a division rival. Think of it this way: even if the Browns had clinched a first-round bye for the playoffs, would you really want us to lay down against the Pittsburgh Steelers so they could make the playoffs? No way. That's what the Colts did. 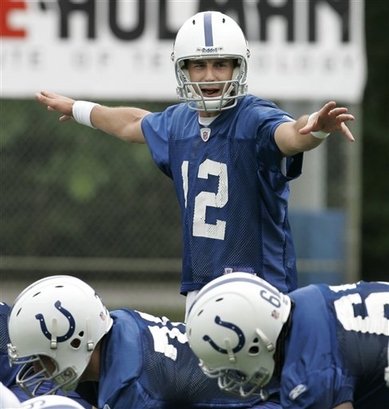 "Hey! Don't blame me, I couldn't even quarterback the Lions!"

After my initial rant (link above), Brad Wells from over at Stampede Blue called for Cleveland fans to stop whining. From what I've read over the months, his feelings about the situation haven't changed. Neither have mine.

Spoiler alert: this Sunday, I am picking the Colts to defeat the Browns. For the first time in several years though, I don't want the Colts to win. I don't care if it sounds bitter, because there is justification behind it -- I want to see Tony Dungy look up at the scoreboard as the clock reads 0:00 and see the Browns with a "W". Last year, we were hoping that this game would mean something to the Colts -- like maybe it would hurt their chances at a division title. Well, there hopes for a division title are slim to none, but there's something even more important on the line: their playoff hopes.

A loss by the Colts will likely remove them from the fifth of sixth playoff seeds for a week or two. We already upset Eli Manning's New York Giants at home this season. Can we do the same to Peyton Manning's Indianapolis Colts? I hope so.