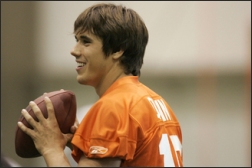 It just seemed to happen so fast. Week after week, many fans would call for Brady Quinn to take over the starting quarterback job. With every effort, we were met with a vague answer from head coach Romeo Crennel, with basically meant "Derek Anderson is my guy". Four days ago, Anderson was still our starting quarterback. Today, he's not.

After sitting on the bench for a year and a half, Quinn will make his debut as a starting quarterback in the NFL. Quinn said it best -- even though it's a short week, there is no room for excuses. He's been preparing for this type of opportunity every week, and he'll get his first crack against perhaps the worst defense we've faced all season. Granted, that may skew his production compared to the tough defenses Anderson has faced, but in the end, all that matters is that "W" on the board.

One drawback for Quinn is that he is not expected to have all of the pieces to the puzzle healthy tonight:

On the same note though, our defense will be tested. Denver is ranked 3rd in offense this season.