Time for Rucker, Dorsey to Shine

Share All sharing options for: Time for Rucker, Dorsey to Shine

Doesn't it always seem like that when a once-potent team is out of contention, some of the critical position players suffer injuries (i.e. when it rains, it pours)? If you weren't interested in watching Derek Anderson quarterback the Browns the rest of the season, then I doubt you're suddenly going to turn on the tube with Ken Dorsey playing.

Heading into the season, we considered our quarterback situation a luxury. Ultimately, it turned out to be a disaster.

Like it or not, Dorsey is going to start the rest of the season, barring an injury. Anderson's MRI today revealed a tear in his left MCL that will not require surgery. However, it will take him 4-6 weeks to recover, meaning he will be placed on the injured reserve soon. We might sign a low-key free agent quarterback with some backup experience this week, but bringing a high-caliber name just wouldn't make any sense at this point. 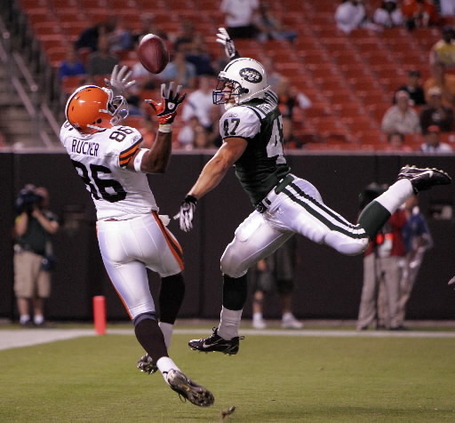 Tight end Kellen Winslow had his MRI too, and reports indicate that he has a "high ankle sprain". Uh-oh. I do not want Winslow to become the next Leigh Bodden when it comes to ankle injuries. What does that mean? Shut him down -- at least for the next three weeks. If that is considered plenty of time to have recovered, it might be worthwhile to get him back on the field against the Pittsburgh Steelers.

Nonetheless, Winslow is guaranteed to be out for this week's contest against the Titans. Steve Heiden will get the start, but with a short-game passer in Dorsey under center, I expect Martin Rucker to finally start seeing significant action (although history says that he'll still sit, as most of us have had fits with Crennel's and Chudzinski's decisions all year). He had his first catch of the season this past Sunday against the Colts in the fourth quarter.

Both players -- Rucker and Dorsey -- have waited a long time for an opportunity like this. Dorsey has not started an NFL game since November 27, 2005. His opponent that day? The Tennessee Titans. On the road.