In the NFL, when you think of the honor of "Most Valuable Player", what comes to mind? Usually, it's quarterbacks who throw for the most passing yards or touchdowns in a single season (or running backs who break touchdown records).

In MLB, when you think of the "Cy Young", what comes to mind? Usually, it's the player who has the most wins, with a solid earned run average playing the difference in a tiebreaker.

With all of those standards pretty much set in stone, could someone, specifically in the NFL, rewrite those standards one day? Someone like...Joshua Cribbs? Back when Shaun Alexander broke the touchdown record and won the MVP award, did he really do anything overly special? I mean, why are we saying a player is more valuable than everyone else just because the team decided to hand him the ball at the goal line for three-four drives each game when they were already up by two touchdowns? Couldn't any other running back in the league have been inserted into that offense and accomplished the same thing? 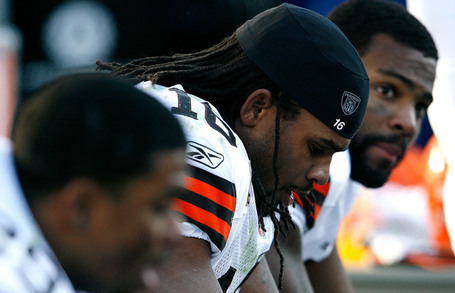 When you consider a player like Cribbs though, everything changes. Has a player ever before been able to...

...all at a high level? Granted, by high level, I don't mean he would make a great starting quarterback or a team's No. 1 receiver, but he can certainly throw and catch better than a whole heck of a lot of other players in the league who don't have either quarterback or wide receiver designated as their sole position. When you couple that with the fact that he is perhaps the best player in the NFL in the first four categories, a player of Cribbs' caliber could most definitely set a new standard for the league's most valuable player.

Against the Tennessee Titans, Jamal Lewis couldn't even average one yard per carry against their defensive line. When Cribbs got into the game at quarterback, the direct snap formation allowed Cribbs to find a hole in the defense every time. The Titans defensive line was tentative -- even so to the point where it looked like if he threw a pass, the defensive line would be clueless on how to react.

Then, in the fourth quarter, the Browns finally called a pass play with Cribbs. Calling that play at that point of the game was horrible on Chudzinski's part considering the score, but the play was awe-inspiring nonetheless. Cribbs received the ball in Shotgun and stood there...for what seemed like an infinity compared to the amount of time Ken Dorsey had been receiving. Then, he wound up and threw a better looking deep ball than any of our quarterbacks had thrown all season. In my mind, the play was good enough to have been complete to Braylon Edwards.

This week against the Philadelphia Eagles, reports indicate that Cribbs will again be more involved with the offense. I'm intrigued.

We're not talking about using him like Michael Vick, Vince Young, or Daunte Culpepper. By my assessment, the hype of a full-time quarterback who can run hasn't produced "the answer" to a team's offensive woes. With innovation, that can change...

Last season, Ken Whishenhunt's experiment of giving Matt Leinart a few series to share with Kurt Warner didn't work out too bad. This season, more mobile players have been placed in the backfield, such as Baltimore's Troy Smith and Miami's Ronnie Brown, with significant success. You can go as far as saying that the Dolphins' creative use of Brown is the reason they are currently in position to win their division. And, while Smith hasn't won games for the Ravens, there have been times where he has made a play that could be looked at in hindsight as a difference maker.

Maybe I'm merely thinking in a dream world here, but Joshua Cribbs has the potential to be the most complete player in the NFL (under a new coaching staff). Some people have questioned whether he should be pushed beyond his current workload. Having a guy that is willing to give 110% on kick returns (plays that often involve some of the game's "sickest" collisions), is asking a lot in itself. Do you know what is not asking a lot though?

Being a football player.

If Cribbs can do it all, then let him. If he can be the difference in a sport that is always filled with games decided by three points or less, then let him.

I didn't have time to do my traditional game review of the Titans game, but I'll still leave a few general comments here (note, my Cribbs' essay above is part of the review too)...

We're 2-0 in Monday night games. Against the Eagles, can we improve that mark to 3-0?