What the Eagles did to us

Share All sharing options for: What the Eagles did to us

The Philadelphia Eagles took it to our offense last night.

Yes, we were without Kellen Winslow, Jerome Harrison, Ryan Tucker, Joe Jurevicius, and our first and second string QBs, but those aren't the only reasons our offense was dominated throughout this game.

Philadelphia defensive coordinator Jim Johnson is what many call a "mastermind", even going so far as to put him on the "Mount Rushmore of Defensive Coordinators".  He dialed up a few of his signature blitzes and confused our offense.  Here is a look at what he and the rest of the Philadelphia defense did to us schematically.

Ideally, against a defense known for successful blitzes and offense can keep itself in manageable 3rd down situations.  This was not the case in the 2nd quarter. On 3rd down with 12 yards to go, the Browns lined up in a 4-wide shotgun set.  2 receivers to the left, 2 to the right, and running back Jason Wright lined up to Ken Dorsey's right. 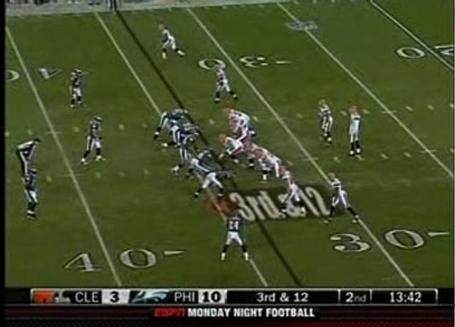 Philadelphia had shifted its defensive line wide.  Both DTs are at the 3 technique (DT's nose on the outside shoulder of the OG).  Both DEs are lined up outside the OTs.

My apologies for the poor quality images.  You can (barely) see both LBs "showing" blitz in the A-gaps to either side of the OC.  They are lined up at either the 1 or 2 techniques (LB's nose on shoulder of OC or inside shoulder of OG).  The nickel back also comes up near the line to show blitz at the top of the screen. 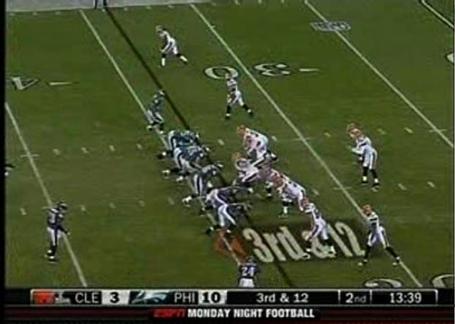 With 7 defenders showing blitz, the 4 left who are almost assuredly dropping in to coverage are the CB at the bottom of the screen, the FS in the lower left hand corner of the screen, and the CB and SS off to the left out of our view.

At the snap, sure enough, all 7 defenders come on a huge blitz.  We only have 6 blockers (5 OL + 1 RB) so we have to let one go untouched en route to the quarterback.  Dorsey only has about a second to decide who is open and get rid of this ball, knowing he will probably get hammered even if he does get the ball out. 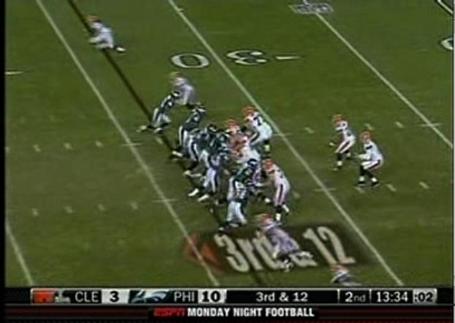 You can see RDE Trent Cole coming off of the line with a clear path to the QB just below LT Joe Thomas, who is already blocking someone else.  After engaging C Hank Fraley to make sure he can't slip over to block Cole, LB Stewart Bradley drops back in to coverage to take away the "hot" route.  Fraley is sealed in the middle of the line with no one to block, and Cole is free to get to the QB. 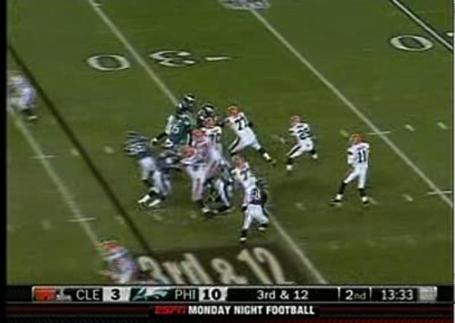 Dorsey gets rid of the ball to avoid the sack, and the pass falls incomplete.  Blitzes don't have to result in sacks to be effective.  Here, in a clear passing situation, the pressure forced a quick decision and an incomplete pass, not to mention a nice hit on Ken Dorsey. 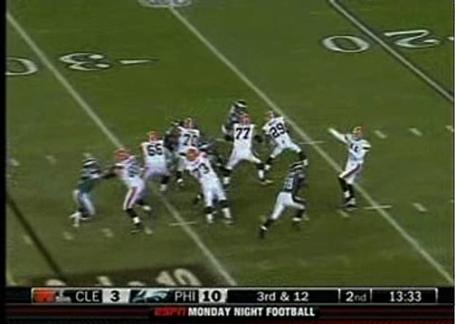 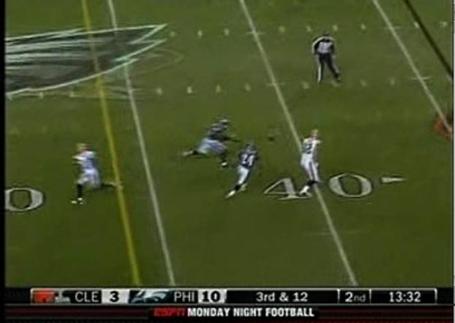 Later in the game, the blitz was even more effective because Johnson was able to get a look at how we were blocking on that particular night.  He was able to use that information to dissect our blocking scheme and turn up the heat:

On 3rd down with 6 to go, we went into a shotgun formation with 3 receivers on the left of the formation, one on the right, and one RB to Ken Dorsey's right: 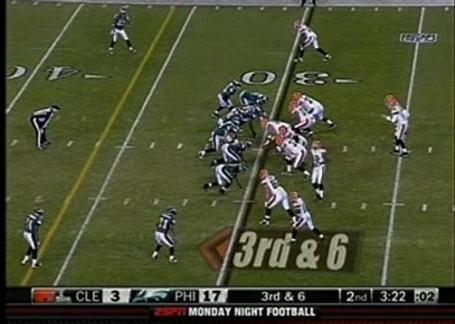 In this image, you can see all but one of the Eagles' defensive players: the free safety is out of the frame to our left, deep in coverage.  Two cornerbacks are playing off of the WRs at around the 1st down marker (showing a cover-3 shell).  The third corner looks like he will be assigned to an underneath zone.  The strong safety is showing blitz between the DT and DE towards the top of the screen.  The defensive line is aligned quite wide, with both DTs at either the 2 or 3 technique (the inside or outside shoulder of the OG).  In the large gap between the DTs, both linebackers are showing blitz again. Look familiar?

This means that 7 defensive players are "showing" blitz, crowded up near the line of scrimmage.   This time, at the snap, both LBs as well as the SS drop in to zone coverage. 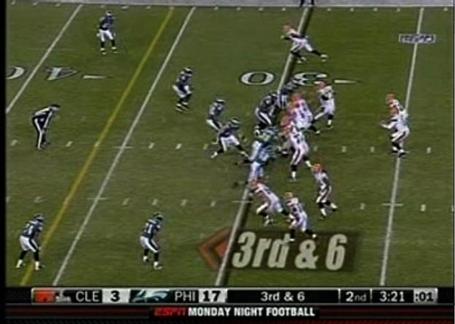 Along with the nickel back, that makes 4 Philadelphia defenders to cover our 4 receivers underneath, with 3 DBs in deep coverage waiting to flock to the ball.  The Eagles only send 4 after the QB, but somehow Trent Cole is allowed to sack Ken Dorsey without being blocked. 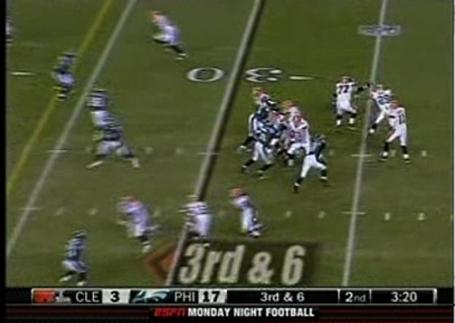 Joe Thomas is the only blocker in the area, and he makes a last-ditch attempt to block Cole.  He looks to be the one to blame for the sack, but is he? 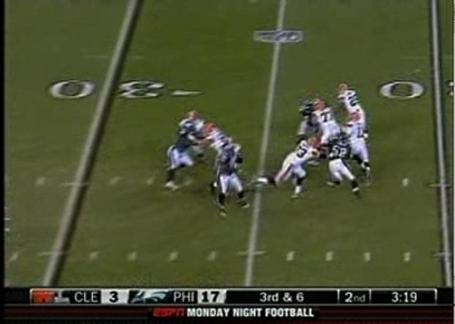 The reason this blitz worked so well is because Philadelphia broke down our protection scheme.  On the first blitz, the Eagles lined up in almost this same exact pre-snap formation. Here, you can see the alignment of the defenders in the second blitz with 4 on the right side of the formation and 3 on the left. 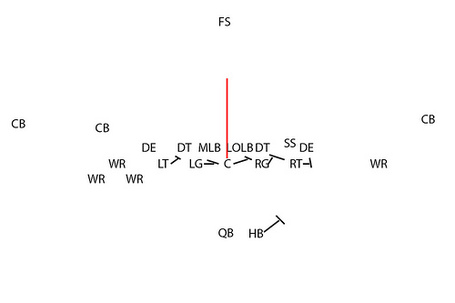 The Browns shifted their protection to the right; they slid the line to the right and kept RB Jason Wright in on the right to block.  Typically, offenses want to get a "big on a big", meaning offenses want linemen to block linemen, and backs and TEs to block LBs or DBs.  If all 7 Eagles were to blitz, RT Kevin Shaffer would pick up the LDE, RG Hadnot would get the LDT, C Hank Fraley would pick up the OLB, LG Eric Steinbach would take the MLB, and Joe Thomas would take the RDT.  HB Jason Wright would pick up the SS, and RDE Trent Cole would be the one guy left who we could not account for.  Here is the way it actually played out: 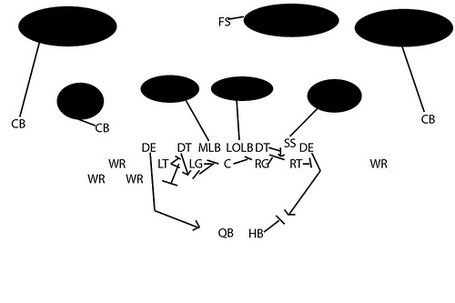 Contrary to the statements made by the announcers, Joe Thomas was not getting schooled by Trent Cole.  The line calls were made such that Cole would be allowed a free path to the QB, and Thomas did his job, blocking down on the DT.  Thomas could have played better in these situations, delaying his decision (which way to block) and/or being able to rediredt to block Cole as the LBs and SS dropped in to coverage.  This was by no means, however, a one-on-one dominance by Cole.

So how does an offense go about beating an aggressive, blitz happy team like the Eagles?  One of the easiest ways is to run the zone-blocking scheme that the Broncos do.  All of these linemen and LBs are spread out across the line, each shooting a gap.  It only takes one of those defenders to get pushed out of his gap by a lineman and a RB in the zone running scheme gets all the way in to the secondary.  With a QB like Cutler (or Quinn), the bootleg off of a zone-run play action fake becomes very effective in buying the offense more time to deliver the ball as well.

Believe it or not, another good way to beat the blitz is to have a phenomenal athlete like Braylon Edwards to throw to.  We actually beat the blitz earlier in the game.  On 2nd and 11, the Eagles shifted their DL to the offense's right, and their LBs to the offense's left.  The SS dropped down in to the box, and the FS and CBs are showing a cover-3 shell yet again. 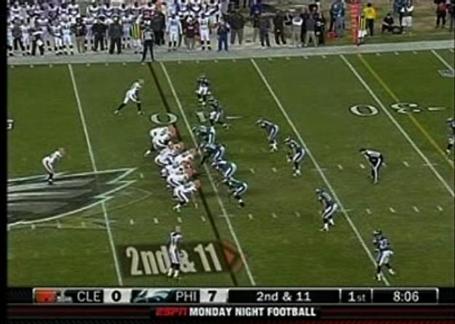 The LDE drops in to coverage on TE Steve Heiden.  The remaining 3 DL as well as the ROLB and MLB blitz, overloading the offense's left.  In the Cover-3 shell, Braylon is basically 1 on 1 with a CB, which is always to Braylon's advantage. 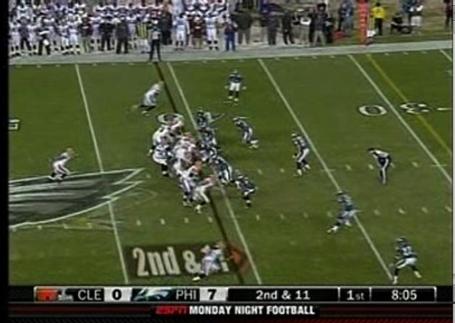 Luckily, Steinbach is really talented and actually pancakes one defender and gets a piece of a 2nd guy: 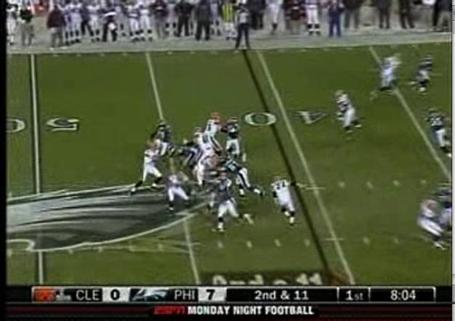 This buys Dorsey enough time to deliver the ball and Braylon goes up over the DB for the catch. 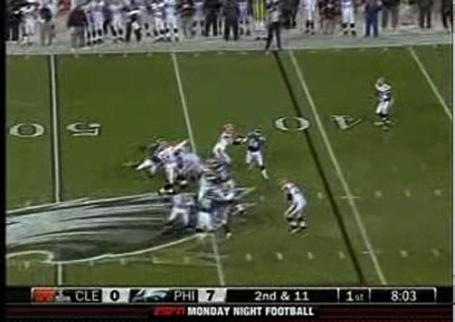 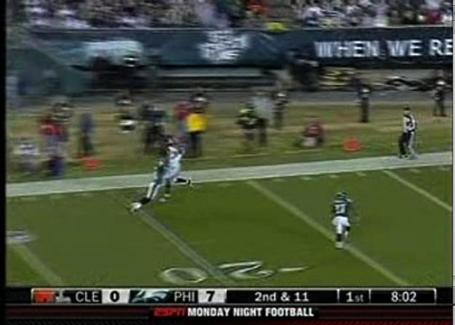 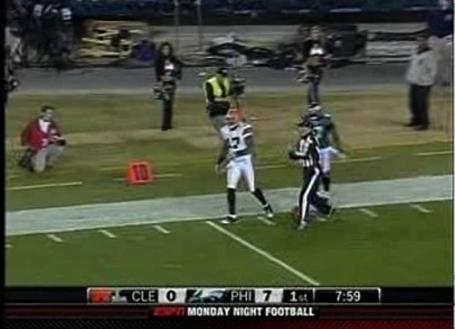 The last way to beat the blitz that I will discuss here is the screen pass.  Basically, you let the defense come, and you throw it right over their heads.  Get a playmaker a convoy and let him run.

In this game, Washington is backed up in their own endzone on 3rd and 15 after 3 penalties.  Baltimore REALLY overloads to the offense's right. 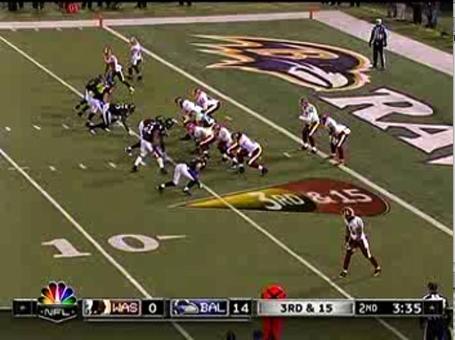 One of the DL drops in to coverage, MLB Ray Lewis is "spying" QB Jason Campbell, and 4 or 5 defenders all blitz from one side. 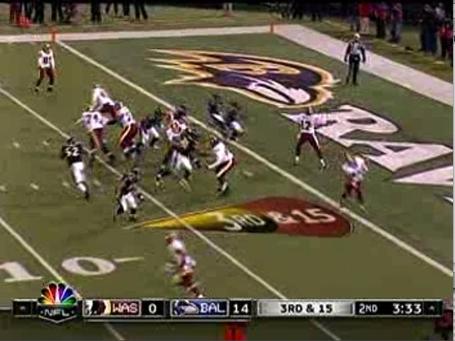 Washington gets a WR upfield to block DB Ed Reed, and 3 OL in front of Santana Moss.  Lewis is now too old and slow to make the play, if it is humanly possible to make this play at all. 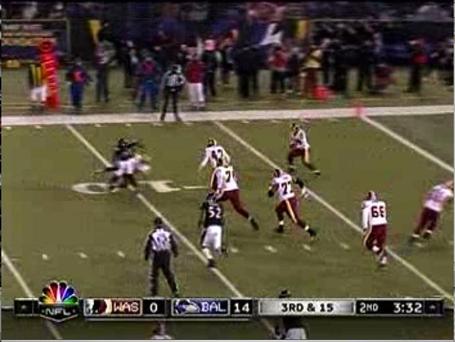 Moss gets the ball in space and has the speed to get a 1st down. 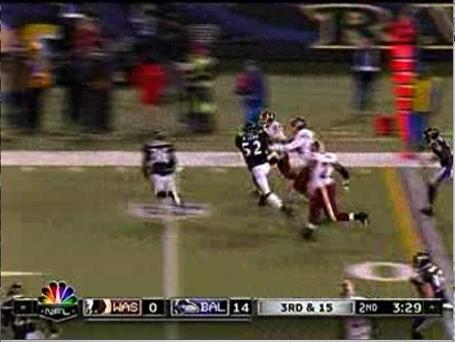