"Cleveland Browns quarterback Brady Quinn has elected to have surgery on his right index finger. The surgery will be performed tomorrow in Alabama by hand specialist, Dr. Thomas Hunt. Quinn is expected to make a full recovery in the next six to 10 weeks."

I suppose the best news about this is that the surgery will not be performed at the Cleveland Clinic. Clearly, Quinn knows what he's doing. 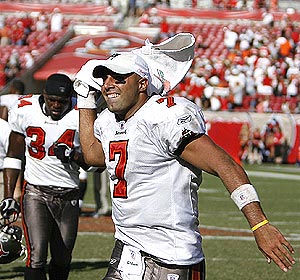 At the moment, the only quarterback on the Browns' 53-man roster is Ken Dorsey. You can claim that we have Joshua Cribbs too, but I'm sure there is a reason he wasn't drafted as a quarterback. Odds are, as a passer, he would have a horrible game unless he is only used in the "flash" package as a passer (i.e. only here and there).

According to James Walker of ESPN.com, the Browns brought in former Tampa Bay Buccaneers quarterback Bruce Gradkowski for a workout today in Berea. His career statistics are not great, but I remember him getting off to a hot start during the 2006 season, much like Kyle Orton did in his rookie year. After that, Gradkowski was shelved due to Jon Gruden's obsession with having five-six quarterbacks on his roster.

Gradkowski might be the type of player you keep for next season as an additional backup to Brady Quinn.

UPDATE (3:29 PM): The Akron Beacon Journal is reporting that we have indeed signed Gradkowski.