Romeo Crennel couldn't beat the Pittsburgh Steelers once in eight attempts. He had losing seasons in three of four years. More than that though, Crennel never showed qualities desirable in a head coach.

Phil Savage had a different story. Heading into the season, I didn't think there was any chance his head would be called for at the end of the season. Then, things went terribly wrong -- including the email situation following the Bills game, the confrontation with Kellen Winslow, and the blatant "jabs" taken at his head coach during the regular season.

There's one thing to say to these two men... 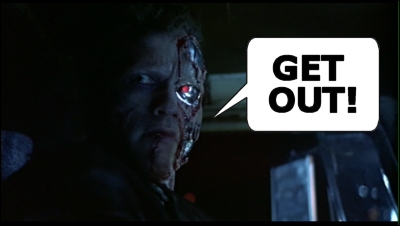 The candidates to replace both men will be speculated over the next several weeks.

Pro Football Talk, Mike Trivisonno, and Tony Rizzo have reported that Savage is gone -- something that may have happened around 5:00 PM Sunday, just following our pleasant 31-0 season finale loss to the backups of the Pittsburgh Steelers. Rumors have been swirling that New England Patriots Executive Vice President Scott Pioli will be offered the GM job.

Savage won't be remembered for everything being "bad". He may not have been the "great" talent evaluator we had hoped for, but it was under his watch that we were able to acquire the likes of Joe Thomas, Brady Quinn, Eric Wright, and Shaun Rogers. All four of those men have the potential to be the heart of our team in an All-Pro manner.

UPDATE: 6:42 PM - ESPN is reporting that the Browns, Jets, Raiders, and Lions have shown an interest in Bill Parcells being their general manager. Other rumors are indicating that Crennel will step down or be let go some time Monday.