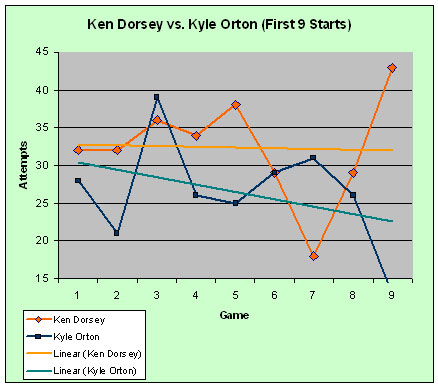 Cool, an Excel graph. What does it mean?

Some people are better visual learners, so here goes: the important parts to look at are the linear lines for Ken Dorsey and Kyle Orton. These lines represent the amount of passes that each quarterback threw for during their first nine starts (I chose nine since those were total starts in which Dorsey played a full game).

The middle of the line represents the sample mean. On average, the number of passes per player were as follows:

Maybe my assessment of these two quarterbacks is wrong. I envision Dorsey as a short-game passer who needs all the support he can get from his running backs. Ideally, the number of passes he throws should be minimized. In Orton's rookie year, the Chicago Bears ran the same philosophy and were able to keep Orton's attempts to a little over 5 attempts less than Dorsey's attempts per game.

Dorsey was just 2-7 during his stretch of games, while Orton was 6-3. Two things always drive up the pass attempts for a quarterback -- you play for the Arizona Cardinals, or you need to compensate for all of the points your defense is giving up. 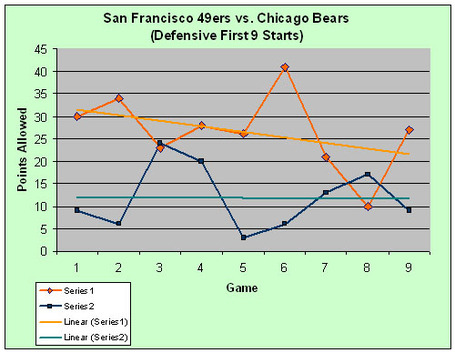 Defensively, the points given up by each quarterback's team during their nine starts are as follows:

If the range between those two doesn't convince you why Dorsey never had a fair shot at winning in the NFL, then I don't know what will. Finally, here is the point: in the past nine games, the Cleveland Browns defense has given up an average of 19.77 points -- and that number is inflated due to our fourth-quarter collapses to teams like the Broncos and Ravens.

The Tennessee Titans are the No. 2 team in the NFL in my mind. We defeated the No. 1 team in the league -- the New York Giants -- with 29 pass attempts and 14 points allowed. Dorsey has not started a football game in three years, and the last time he did, it came against the Titans in Tennessee. A lot has changed since then. While Dorsey has shared his wealth of knowledge with Brady Quinn, I'm sure Dorsey has become a better student of the game himself.

We saw signs in the preseason that Dorsey could provide a decent spark, and that was with third-string players. It might be tempting to say "abandoned the run" against one of the league's best run defenses and have Dorsey throw a lot. However, that is not his game -- he showed that by not being able to overcome all of the points the 49ers gave up when he played with them.

Our best chance at beating the Titans is to do exactly what we did against the Indianapolis Colts on Sunday -- minus Derek Anderson's erratic play. We need to give the ball to Jamal Lewis INSIDE. Then, utilize Jerome Harrison not on running plays, but on screen passes -- something Dorsey can handle in a short-pass offense. Braylon Edwards doesn't need the ball, but it's time to show why we signed Donte Stallworth: short crossing routes that he can then turn up the field for yards after the catch. Martin Rucker can provide the same element, hypothetically. If the field position game needs to be played, so be it. I could just say that our defense needs to win this game, but that is not all there is to it. The defense gave up three points to the Colts, and we lost.

Not even a flash package with Joshua Cribbs can be afforded -- the Titans' defense will not be fooled when he is inserted into the game, and doing it too often would only increase our chances of turning the ball over.

Expecting us to execute on the road as well as I outlined above is taking a huge leap of faith, but it is our only winning formula this Sunday.

I am fully aware of the millions of other factors that can make a case at disproving these causal relationships in the graphs and explanations -- but I was bored and threw up graphs that probably weren't even necessary.