Last year, the Cleveland Browns averaged 25 points a game. For our defense to give up just three points in our stadium against the Indianapolis Colts and come away with a loss is shameful. We don't have the most talented group of guys on defense, but every time the unit seems to play a heck of a game (versus Pittsburgh, Washington, Indianapolis), our offense lets them down.

Against Indianapolis, it was even worse. The defense had the lead in the fourth quarter...and they never lost it. They still held -- but all it took to lose the lead was a Derek Anderson turnover for a touchdown. Frustrating. 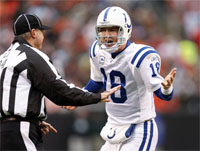 The Browns' secondary, including DB Brandon McDonald and S Brodney Pool, caused Colts QB Peyton Manning to not lead his offense to a touchdown for the first time in his era.

Goats of the Game (Bite Me) 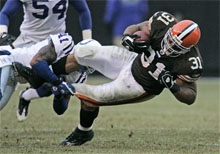 RB Jamal Lewis got the touches he wanted, but failed to come through despite an injured Colts defense. 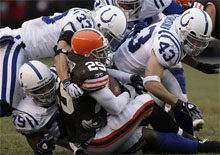 Let's go to RB Jason Wright at the critical juncture of the game. Why not? It worked against the Ravens and the Texans! 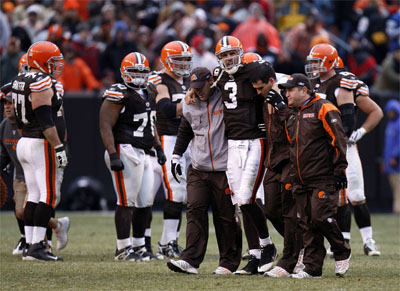 I can't say the game was a dud like I did in the Texans game two weeks ago. Because Manning and the Colts have a premiere offense, I was so focused and impressed during the game by how well our defense played that I can't say I was bored in the least. Our offense was inept, but they also played a pretty good field position game -- it's just unfortunate that Anderson fumbled in the end.

Up next, we've got the best team in the AFC, the Tennessee Titans, on the road. I'm looking forward to seeing the type of day our defense has against a well-managed Titans offense.