Share All sharing options for: Putting Faith in Derek Anderson

Take a look at these statistics:

Three teams, three sets of expectations, and three struggling quarterbacks. If you had to rank the expected chain of success of these three teams heading into the season, it would've gone in the following order: Colts > Browns > Rams.

When it comes to Manning struggling, there's simply no way he's going to be benched unless he takes himself out.

When it came to Bulger struggling, not only this year but for a good portion of last season, the Rams had enough. He has been benched, and backup QB Trent Green is set to take over this week. 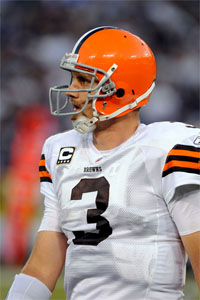 Where does that leave the Browns then? We are giving Derek Anderson one more shot. He has not shown any sign of needing to be our quarterback of the future for the first three games of this season. Bringing up last season's struggles toward the end of the year do not affect that -- last year was Anderson's first year as a starting quarterback, and anyone surprised by a first-year starter struggling set their expectations too high.

What do I remember from Anderson all offseason? I remember writing training camp reports that he was looking exceptional in camp. He could throw deep touchdowns to Braylon Edwards with his eyes closed. He started accepting Donte Stallworth as a legitimate second option. Travis Wilson was looking like a decent third receiver. Then, in the first preseason game, Anderson looked good.

After that...things changed. Anderson suffered a concussion against the New York Giants. Edwards missed the rest of camp with a cut on his foot. Stallworth has missed the first three weeks with a hamstring injury. Wilson was cut. Where did that leave the offense?

This week, Anderson is getting part of the puzzle back. Stallworth, while not 100%, has at least been practicing and is expected to make his long-awaited return. For the first time this season, we'll see how Anderson can run this offense a little closer to how it was intended to be run. I emphasize "a little closer" because with Eric Steinbach out 3-5 weeks, that adds a different variable. Heading into the season though, the offensive line was our deepest position -- wide receiver was pretty thin.

This piece is not meant to make amends for Anderson's discouraging efforts over the first three weeks of the season. However, we still have a big football game this week against the Cincinnati Bengals. It's a division game. I don't want to change quarterbacks during the game. I want the Rob Chudzinski offense from last year, and that can only come with continuity -- at least for this week.

From a control standpoint though, it's understandable why a change would be necessary following a Week 4 loss. I still have faith in Anderson to lead this team. The hidden variable though is that at some point, Romeo Crennel is going to have to start worrying about his job. It's do-or-die time for Anderson -- but I'll be cheering for him from the first snap to the final blow of the whistle this Sunday.