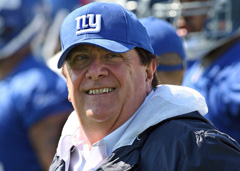 Tally up another day in which George Kokinis has not signed with the Cleveland Browns.

According to the Star-Ledger, the team interviewed another candidate last week -- Giants director of pro personnel Dave Gettleman. With the Plain Dealer reporting yesterday that an offer has "yet to be made" to Kokinis, could it be time to start thinking about other candidates? Likely not, but you never know.

Gettleman has been the Giants' director of pro personnel for ten years now. Particularly in the past several years, their acquisition of talent on the offensive and defensive lines has been impressive. Exactly how much Gettleman has had to do with those acquisitions, I don't know.

Perhaps the most interesting part of the Star-Ledger's piece is the following:

Retired Giants GM Ernie Accorsi is serving as a consultant for the Browns during the team's search. It's likely he endorsed Gettleman as a candidate.

This is the first I've heard of Randy Lerner opening his ear to someone with experience, and that can only be a positive sign. Could Accorsi have put in a good word for the recently hired Eric Mangini too?