To put it simply: a lot.

I will attempt to show for the 2008 season what our defensive goals were, how we sought to accomplish them (with respect to individual players and the defense as a whole), and why exactly our defense failed to become an elite unit.

Because it was the most positive memory of the season that I have, I went back and looked at the tape of our Monday night game against the New York Giants.  I will use this footage as sort of a case study that will (hopefully) explain what went wrong this season in general.

Clearly, everything that was bad about the Browns' defense in 2008 can not be covered in one write-up, so this will be a multi-part review, hopefully reaching larger conclusions in future installments.  This entry will look at the Browns in man-to-man coverage.

When it went right: During the Giants' opening drive, our defense was in classic "bend" mode, giving up chunks of positive yards on 5 of 6 plays to open the game. We let the Giants get 40 total yards on those first 6 plays which amounts to a whopping 6.67 yards/play, the Giants easily averaging a first down for every two plays they ran. The drive ended well for us, however, with Brodney Pool intercepting Eli Manning to close the drive.

So what did we do for the two plays (including the turnover) in the opening drive where we didn't give up positive yards?  Somewhat surprisingly, we played man-to-man coverage.

On last play of that opening drive, the Giants had lined up with 4 WR and RB Brandon Jacobs to Eli Manning's left in the shotgun package.  We countered by going to our Dime package (4 CB), moving pass rushing OLBs Kamerion Wimbley and Willie McGinest to DE and having 4 down linemen.  Shortly before the snap, S Nick Sorensen moved up to the line of scrimmage, showing blitz.  Here, Sorensen is just crossing the yellow 1st down line on the top half of the screen. 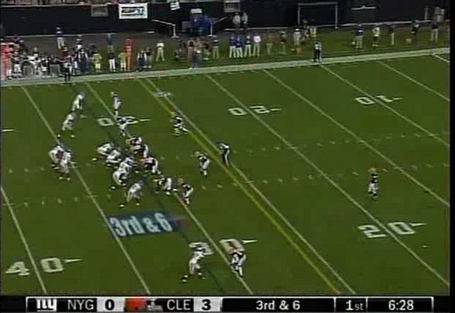 With Sorensen up at the line and S Brodney Pool deep, we basically tipped our hand that we were playing either Cover 1 with Pool in deep coverage (man) or Cover 3 (which would almost definitely be zone). 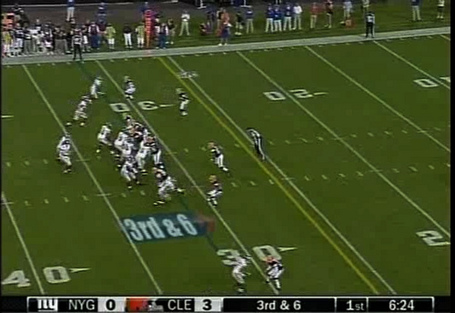 Off the snap, you can see Sorensen blitz to Kamerion Wimbley's right.  Sure enough, we are in Cover-1 (man). 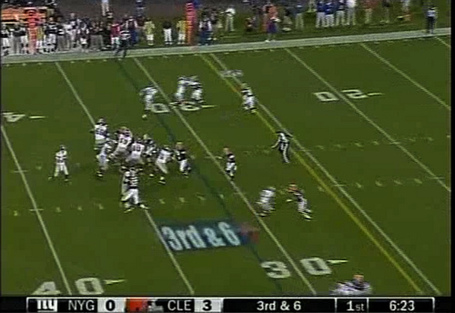 Kamerion Wimbley was lined up next to Shaun Rogers to form the right side of the defensive line.  Wimbley and Rogers ran what is called a "stunt" or sometimes a "game" where they basically cross paths en route to the QB.   Rogers' job is to shoot the B gap between LG and LT and occupy the LG.  If Sorensen occupies the LT, McGinest occupies the RT, and Corey Williams can demand a double team from the C and RG, there should be no one left to block Wimbley, who is to loop back inside Rogers into the A gap between C and LG.

In other words, ideally, the play would like this: 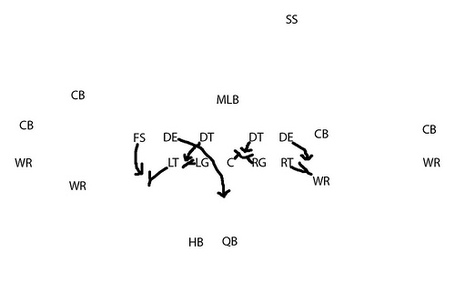 I believe there is a design flaw in this blitz even though it ultimately ended up being successful.  As you can see, one blocker was all the Giants needed to take care of Corey Williams.  Shaun Rogers probably would have demanded at least a partial double team and let Wimbley get to the QB easier.  Corey Williams (based on what I had heard about him) was pretty good at shooting gaps in Green Bay, and could have performed the stunt with Wimbley.  Rogers is the only player on our team who demands a double team. 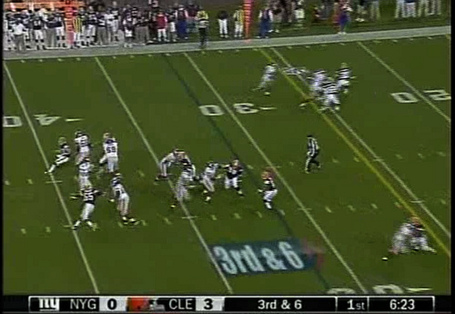 Here, you can see McGinest (#55) beating his man.  Sorensen is engulfed (as one might expect a backup S to be by a starting LT), Williams can't get any movement on the RG, and Wimbley and Rogers are both beginning to beat their men. 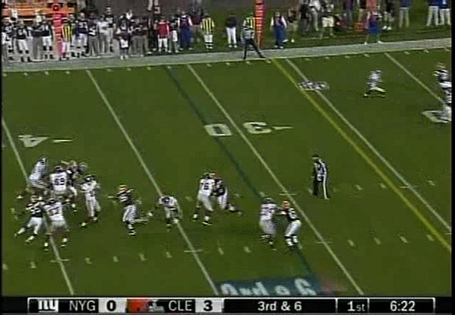 McGinest didn't get the sack, but he did force QB Eli Manning to step up into the pocket.  Along with Rogers, McGinest helped make Manning a sitting duck for Kamerion Wimbley who is seen here just before he gets a hit on Manning. 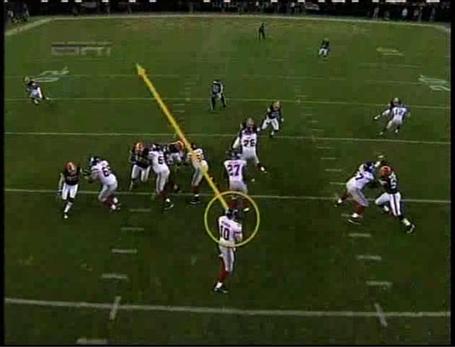 As illustrated by the Worldwide Leader above, Eli was staring Plaxico Burress down the entire play.  Because of the pressure applied by Wimbley, Rogers, and McGinest, he had nowhere else to go and either had to take the sack or throw to Plax.  Note in this image how far Brodney Pool seems to be from the play. 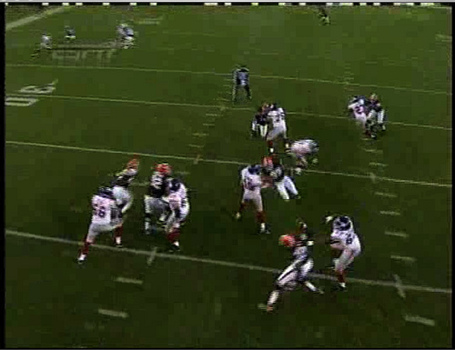 Brandon McDonald has very good coverage on Burress (the right of the two receivers), and Pool gets a good jump on the ball.  Eli may have had a shot if he is able to step in to this throw, drive the ball, and sink it down in to the back-left corner of the endzone.  In other words, there is probably a place that Eli could have put the ball where Burress could make the catch but neither McDonald nor Pool had a shot at it, BUT the teamwork of the pass rush and the secondary made this in to a big play for our defense. 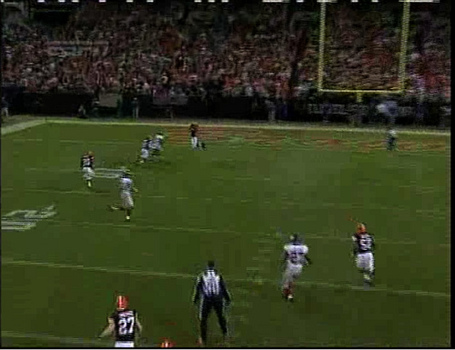 When it went wrong: Probably remembering our earlier success, we went back to almost the same exact defensive play later in the 2nd quarter.  In the same Dime package, this time we lined Corey Williams up at the 1 technique with his nose over the C's right shoulder.  We also brought MLB D'Qwell Jackson up, showing blitz between Williams and LDE Willie McGinest. 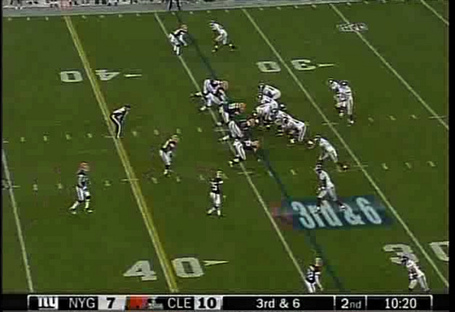 If you are reading this blog, you have probably seen a QB step and maybe flex his hands as though he were receiving the shotgun snap (possibly even accompanied by a head fake by the center) only to not get the ball.  Offenses do this to try to sniff out "late" movements by the defense that are to be made shortly before the snap.  In the photo above, you can see the C with his head down, looking for the signal from Manning, while Eli does his little step.  Below, you get Sorensen's reaction. 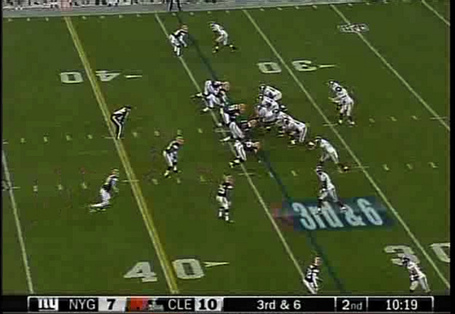 If timed correctly, blitzes and late shifts can give offenses all types of trouble.  A QB thinks he has made the correct read and knows who will get open, but the defense changes looks and what he thought was there is now gone.  Show one thing, then take it away.  (Side note: I don't know much of anything about Baseball...can anyone explain why Baseball defenses don't do this type of thing?  Seems like it could at least distract a hitter every now and then...)

Eli sees the blitz coming, makes the adjustment, and Sorensen knows he has been sniffed out so he just lines up at the line of scrimmage. 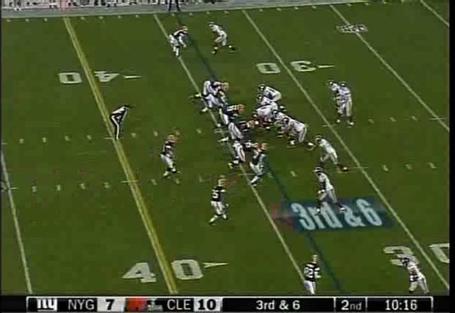 Corey Williams is presumably lined up closer to the C to make it easier for him to draw the C's protection his way and to allow Kamerion Wimbley an free pass to the QB.  I would guess that D'Qwell's presence up on the line was intended to draw the RG's protection, making it all the more necessary for the C to block Williams. 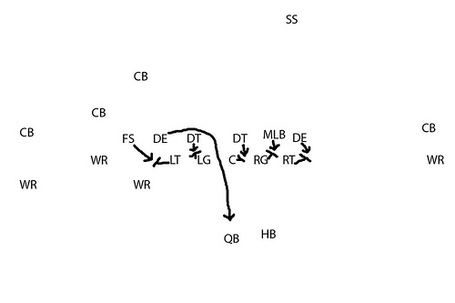 With the HB either having to cross in front of the QB to try to get a piece of Wimbley, or running a pass route to try to catch the ball, and not staying in to pass block at all.

Here is what actually happened: 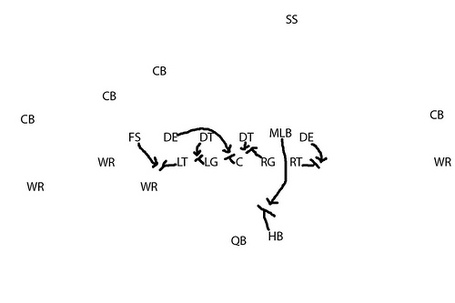 I like the fact that Romeo and Mel Tucker made an in-game adjustment by moving the DL around and even sending more people at the QB (6!) to try to create pressure.  They did get a favorable matchup with D'Qwell Jackson being blocked one-on-one vs a RB (although if Brandon Jacobs had been in the game, he has the advantage 1-1 vs just about any LB).

(Jackson using his favorable matchup and beating the RB, while the rest of the blitz is nullified by the Giants)

The first thing that accounts for the failure of this play is still the coaching staff's fault, though.

Instead of overloading, we just trusted our players to beat their blockers one on one, and we didn't even create mismatches (such as trying to get the RB to block a 300+lb. lineman instead of ~240 lb. Jackson).  A few of our defenders eventually beat their men.  Jackson forced Eli up in the pocket, and Rogers spun off of his man and got a big hit on Manning.

BUT because of another mistake by our coaching staff, the Giants got positive yards. 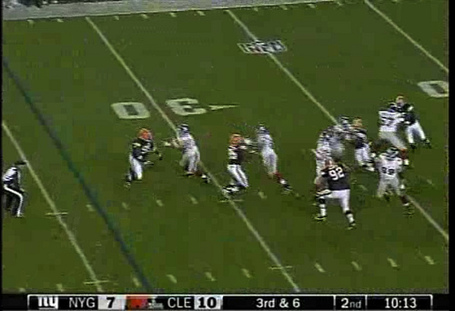 (Rogers about to crush Eli) 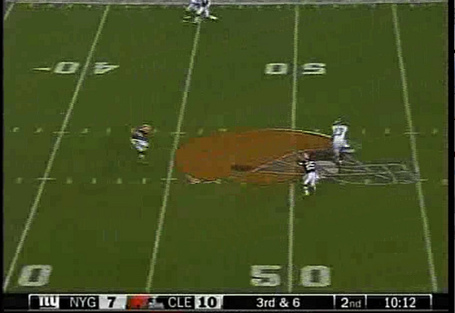 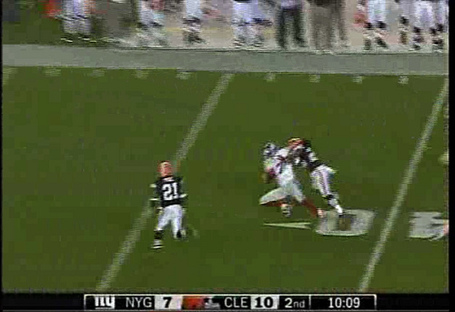 That's a 30 yard gain.  Not a back breaker, but not the type of play you want to give up if you are to become an elite defense.  Part of the reason the Giants were able to do this is that Cousin is not a good player, but a lot of the blame rests with the coaches for asking him to try to guard Burress.

Refusing to move another DB over to cover Plax (and probably give it away that we were playing man coverage) for one play isn't that big of a deal.  Romeo and Mel didn't learn from their mistake, however.  As you can see below, the Giants exploited this same mismatch for a TD later in the game. 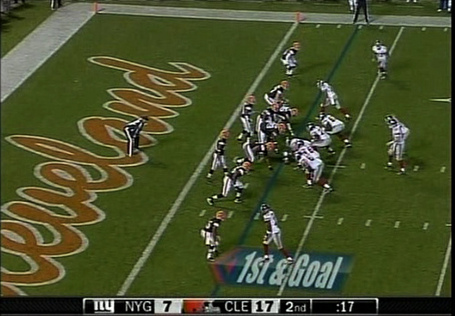 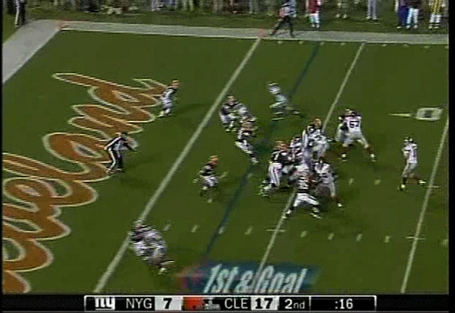 Cousin lines up over Burress and doesn't get a great bump at the line...

Man coverage, with Burress starting to get separation out of his break.  Two defenders are waiting for a run out of the shotgun, five rushers don't have time to get to Manning... 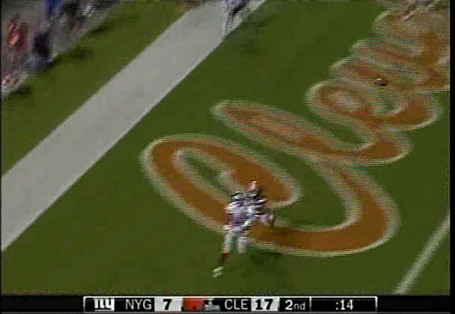 Cousin not closing well on a ball thrown high to the 6'5" Burress... 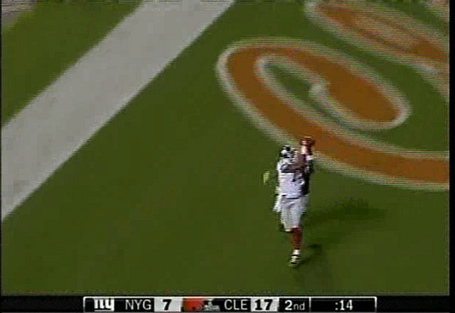 Outside of Shaun Rogers, our front 7 didn't have a lot of pass-rushing talent.  Our defensive backs weren't Pro Bowlers.  But, when the whole defense worked together in a way that surprised the offense and got pressure on the QB, they could still get the job done in man coverage in 2008.