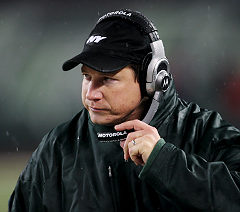 Get used to that expression Browns fans.

The Cleveland Browns will hold a press conference Thursday morning to announce that Eric Mangini is the new head coach of the Cleveland Browns. Besides having the title of "head coach", it is expected that Mangini will have more control of the talent on the 53-man roster than Romeo Crennel ever had.

Mangini's staff is already in the process of being assembled.

Offensive Coordinator: Things aren't looking good for Rob Chudzinski. Originally, reports came in that Jets OL coach Bill Callahan would be offered the Browns' offensive coordinator job. However, the Jets are able to block that from happening. NFL.com's Adam Schefter reports that Jets QBs coach Brian Daboll has emerged as the favorite to be Cleveland's next offensive coordinator.

Defensive Coordinator: The Browns hired former Raiders defensive coordinator Rob Ryan to fill the same position in Cleveland, according to NFL.com's Adam Schefter. Ryan ran a 4-3 defense in Oakland, but he has experience controlling a 3-4 defense. Personally, I want to see the 4-3 scheme in Cleveland again. Ryan, a former head coaching candidate with other teams, certainly provides more experience than Todd Grantham and Mel Tucker had.

I wonder if Ted Dashier's control of special teams will remain in tact. The Browns have had success with Phil Dawson, Joshua Cribbs, and several other special teamers the past two years.

UPDATE (12:11 AM Thursday): From the Plain Dealer, regarding former head coach Romeo Crennel:

New Browns head coach Eric Mangini and fired coach Romeo Crennel reportedly agreed Wednesday that there was not a place for Crennel on Mangini's staff, such as defensive coordinator, sources close to the situation told The Plain Dealer.

Crennel could be willing to stay around in an advisory role, the source said. But ESPN's Michael Smith reported Wednesday night that Crennel and Mangini would part ways.

I didn't expect him to stay, and this seems to all but confirm that.