Defense and Special Teams: All You Need to Win a Football Game as Browns Prevail 6-3

Share All sharing options for: Defense and Special Teams: All You Need to Win a Football Game as Browns Prevail 6-3

Who says you need an offense to win a football game? That in itself is not necessarily a true statement, as the Cleveland Browns did have a fairly good day on the ground with Jamal Lewis in their 6-3 victory over the Buffalo Bills.

Around the league, the media made a joke of this game, but I think the joke was more so on the state of the Buffalo Bills. After how dismal the first three weeks of the season were, the fact is that the Browns challenged a now 4-1 Bengals team two weeks ago and took care of business against the Bills on the road. Let's get to the review of the game... 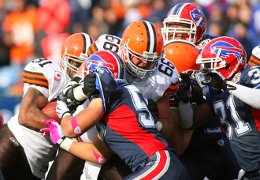 The running of Jamal Lewis set the Browns up for a game-winning field goal. 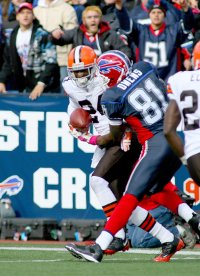 The interception by Eric Wright kept the Bills' offense silent.

Up next, the Browns have the Pittsburgh Steelers. The rivalry doesn't seem as strong with our current losing streak against them, but I think all it will take is one win over them to finally get the blood boiling again. Who knows -- maybe a win against the Steelers will help define the "legacy" of Eric Mangini in Cleveland.