Share All sharing options for: Browns Can Only Muster a Lucky-Bounce Field Goal in 31-3 Loss to Packers

As goofy as Mangini sounded in his post-game press conference, he was right about the things the team needs to work on:

(On the style of play he is hoping to get from his players every week)- "Aggressive, intense, tough, physical, finishing, being able to respond to a successful play that our opponent has and come out and create a successful play ourselves, consistency, execution, communication.  Good, solid, sound, fundamental, tough football.  Physical football.  Intense football. That’s what I want every week.  That’s what I want every single week.  We’ll make mistakes and there will be plays that aren’t executed as well as they should [be] or things that we can do better, but if you play at that level every single week, you give yourself the best chance to succeed."

In summary, we need to work on everything. For a "veteran" head coach, shouldn't we be much further along at this point?

Let's get to the review of the game... 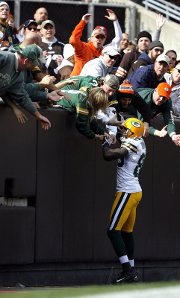 The Packers fans had a lot to celebrate about in Cleveland Browns Stadium. 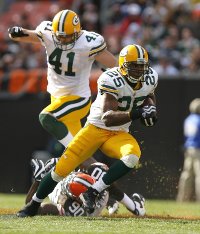 RB Ryan Grant tore through the Browns' defense for his first 100+ yard performance of the season.

Up next, the Browns will head to Chicago to face the Bears. The Bears were atrocious against the Cincinnati Bengals this past Sunday, but they know they are a better team than that. If Jay Cutler gets time, he will rip a defense apart. Considering the lack of pressure we're generating, it looks like it'll be another long day for our defense.