So far this season, our offense has scored 58 total points, for an average of 8.3 points/game.  That simply isn't going to get the job done in the NFL.

Why exactly are we so bad?  Where do we need to improve?  Is there anything positive to take away from our offensive performance amidst the sea of ineffectiveness?

I finally got my hands on some game film, so I decided to take a look at this past Sunday's game against the Green Bay Packers.  I will break down three plays that didn't work here, handing out blame to the guilty parties.  Look for a breakdown of some plays we ran effectively to be posted Saturday night.

This is a play we ran very effectively last year (check out my comment with screenshots).  If all goes as planned, Josh Cribbs goes in motion and blocks down on a defender on the line of scrimmage, then LT Joe Thomas pulls around Cribbs, lead blocking along with FB Lawrence Vickers.

I love this play, as it suits our strengths.  It allows Cribbs (a tough, physical player for his size who isn't afraid of contact) to catch someone off-guard and light them up.  It allows Joe Thomas (a ridiculously athletic man for his size) get out into space and engulf a smaller defender.  It allows Vickers (an above-average athlete at FB) to lead block in space, and it runs away from one of our offensive weaknesses; the right side of the line.

The problem with this play starts with the fact that we have RB Jamal Lewis in the game over RB Jerome Harrison.  Harrison is much faster than Lewis.  Sure, the defense might know we like to run outside with Harrison, but who cares what they know if they can't stop us?

The second problem is that for whatever reason, Cribbs isn't exactly sure who to block: 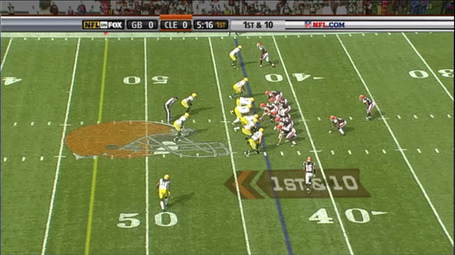 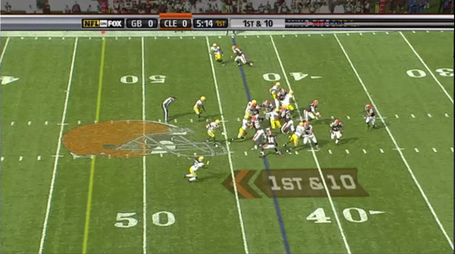 You can see him ready to block but not taking anyone on above.  It was a bit of a weird front, as Green Bay had moved the FS Nick Collins up to the line of scrimmage bewteen ROLB Clay Matthews and RDE Cullen Jenkins.  I have a feeling that Cribbs thought he was to block the SS, who TE Greg Estandia took on immediately after the snap.

In this situation, it is better for Cribbs to block the "wrong" guy, but to be wrong decisively.  Instead he waits and waits, and even lets RILB A.J. Hawk run right by him... 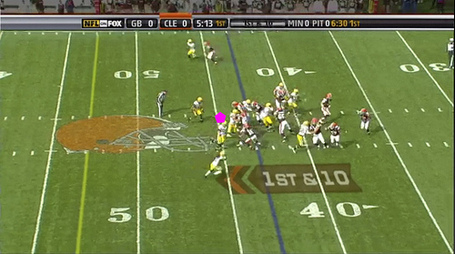 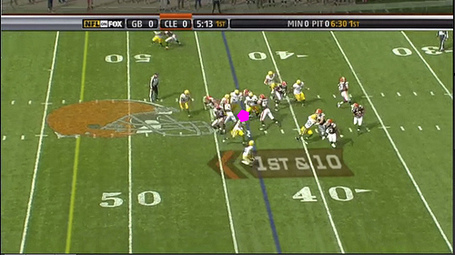 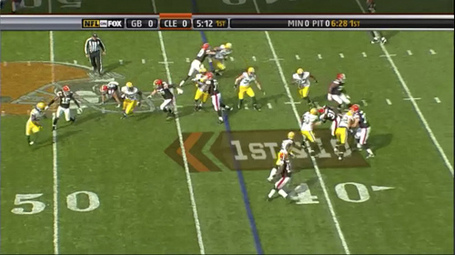 Early in the second quarter, we ran another play that epitomized what is wrong with our offense.

I like that our coaching staff tried something different, lining Hank Fraley up at Tight End.  The problem with the personnel package we used, however, is that it failed to create the mismatches we wanted.  Fraley does one thing as a TE, and that is block.

Green Bay knows the pass is less of a threat--especially to the bottom of the screen--with Fraley at TE.  Because of this, they are able to walk their SS up to put 8 men in the box: 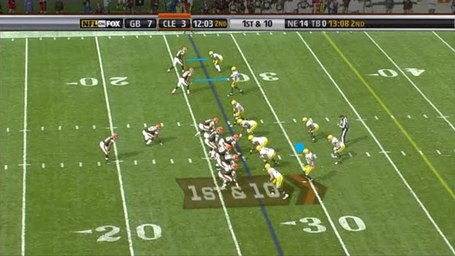 Against an eight man front, we only have seven blockers available (5 OL, 1 TE, 1 FB), which means the defense will have an unblocked player available to make the tackle even if we are able to make and sustain all our blocks.  This is why Bernie Kosar always advocates throwing the ball against an 8 man front when he is the color man during our preseason broadcasts.

DA can reasonably suspect that Green Bay is in man coverage because CBs Charles Woodson and Al Harris are lined up directly over WRs Brian Robiskie and Mohammed Massaquoi.  Facing man coverage and an 8 man front, we should be in great position to pass the ball. DA can guess with some confidence that Green Bay is playing Cover-1, facing anywhere from a 4-6 man rush.  So, DA checks to a pass: 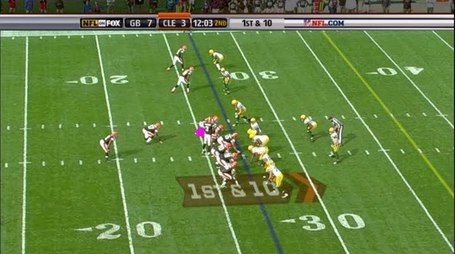 Because of our substitution of Fraley at TE, we aren't in much better position to pass the ball.  Green Bay is able to send 6 rushers while still playing man-to-man on all of our receiving options and having deep "centerfield" safety help.

After the snap, rookie WRs Massaquoi and Robiskie struggle to get off the line of scrimmage against press coverage.  Further exacerbating the delay in getting open, both WR are running relatively slow developing routes.  We are running the "switch" concept (see WRs X and Y, ignore the others): 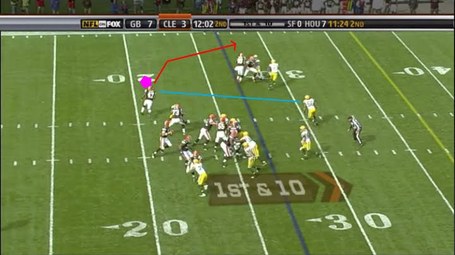 When DA hits the back of his drop, the WRs are no where close to where they need to be.  Instead of looking them off and checking down to FB Lawrence Vickers, who is open and could probably pick up a solid gain, Anderson continues to stare down the WRs.

Compounding the problem is the fact that DA doesn't have another player running a route because RB Jamal Lewis is pass blocking and our other eligible receiver is OL Hank Fraley, who isn't ever a threat to catch a pass.

After hesitating, DA fires a dangerous pass almost right to LB Nick Barnett.  He was lucky this wasn't a pick 6. 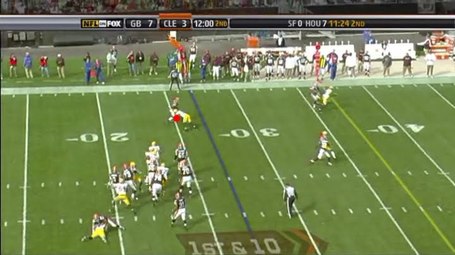 We come out in a singleback shotgun formation with WR Mohammed Massaquoi at the top of the screen, and WRs Brian Robiskie and Chansi Stuckey, along with TE Greg Estandia in a trips formation at the bottom of the screen. 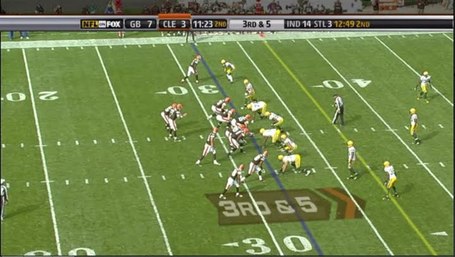 DA sends Estandia in motion across C Alex Mack, and then back to his original place in the formation: 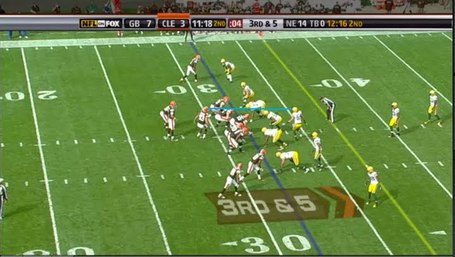 Off the snap, Estandia stays in to block, but our protection scheme is such that he has to cross paths with RT John St. Clair to pick up the blitzing LB Chillar (who was trying to deceive us and is actually blitzing, not covering Estandia).  Initially, I thought Mack blew our pass protection because he wasn't blocking anyone off the snap... 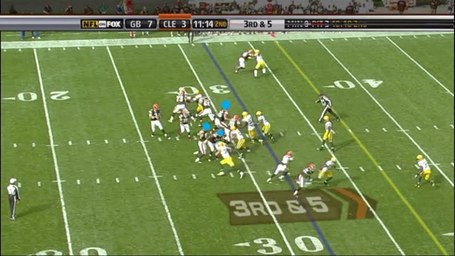 but Mack actually knew exactly what was coming, as Green Bay's rushers stunted.  Anderson, knowing he has Massaquoi basically one-on-one, stares him down.  Massaquoi has a step, but Stuckey seems to be getting open behind S Atari Bigby. 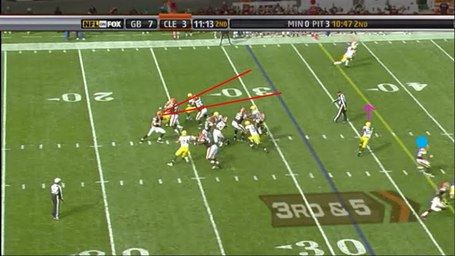 I have to blame the play design here.  Against Cover-1, there is usually a LB or S playing a short zone in the middle of the field (a "robber").  To me, it's clear that if Stuckey were running an out or a corner route here, he would be open for the 1st down, as there is no help in those areas of the field.

In 2007 when DA was at his best, he was trying to fit balls in to tight spaces, and he was throwing some jump balls (high risk), but he was also taking shots downfield (high reward).  He goes that route again here, but he makes a really weak effort.  At this point, he has held on to the ball long enough that he knows he is probably going to get hit.  Instead of stepping up into the pocket and taking that hit ("like a man"), he tries to avoid the contact... 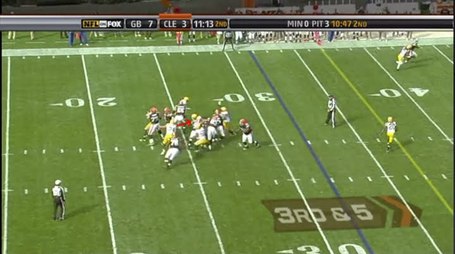 ...and because he doesn't step into his throw, he ends up grossly underthrowing Massaquoi... 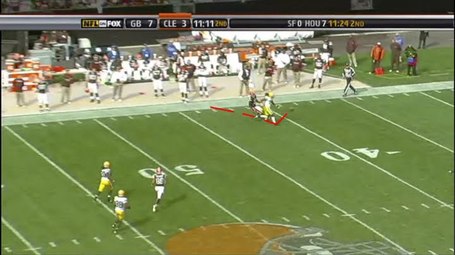 ...right off of Al Harris' foot.  I don't need to talk about how bad of a throw that is, but it should be especially embarrassing because he wouldn't just take a hit for the benefit of the team.

Here is where I place the blame, from least blame to most blame:

We should work three or four runs that we can run out of any formation and master them.  We should take three or four passing concepts/route combinations and master those.  Ideally, a few of the runs compliment a few of the passes (play actions with the same blocking patterns, etc,) and they'd compliment each other.  Once we have the simple things down, then we can put in the wrinkles and the tricky pass protections and the counter punches.  As it stands now, we have nothing to counter off of.