In Part I, I broke down three plays that I felt exemplified the Browns' offensive woes this season.  Here, I will break down two plays that did go our way.

The Browns may lack explosive playmakers who could allow us a good offense, but by studying exactly what it is that has (and hasn't) worked for us, a solid offensive coordinator could put together a competent offense without any personnel changes.

After stopping the Packers on 4th and 1 midway through the first quarter, the Browns took over at their own 30 yard line.  We lined up in a singleback formation with WRs Mohammed Massaquoi and Mike Furrey lined up to the left of the formation, along with TE Michael Gaines.  Jamal Lewis is in the backfield, and TE Greg Estandia is on the opposite side of the formation: 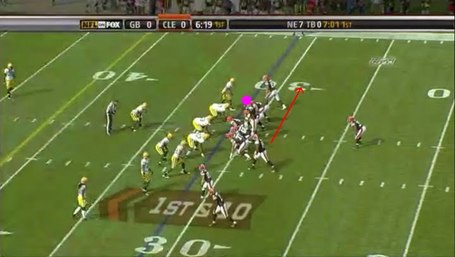 I actually like what the coaching staff did with this formation for a couple of reasons.

First, it is hard to run a Cover-2 against a trips formation, so we should have already taken some of Green Bay's defensive options.

Second, double TE sets usually have a built in advantage against an odd front: they match up fairly well with 3-4 OLBs, and Daboll could play a cat/mouse game with Green Bay DC Dom Capers (alternating between keeping the TEs in to block the OLBs and then releasing them to catch passes).

Third, before TE Michael Gaines goes in motion, look at the right side of our line vs the left side of Green Bay's defense above.  If we were to run to the right, we'd outnumber Green Bay 4 to 3 on that side.  If we executed our blocks well, we could momentarily double-team NT Ryan Pickett, then have RG Rex Hadnot relase to block ILB A.J. Hawk at the second level.  Jamal Lewis wouldn't face a potential tackler for 10 yards.

We do end up bringing Gaines in motion, and DA sees that Green Bay is once again in a Cover-1 look: 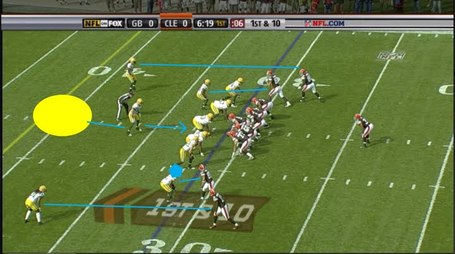 The motion not only reveals something about the coverage, it also causes confusion between LB Nick Barnett and S Atari Bigby: 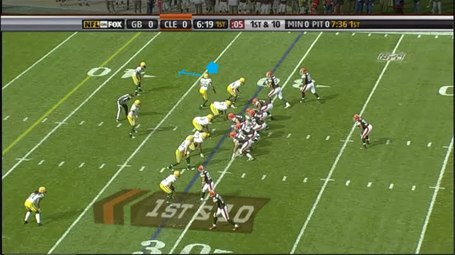 Whatever switch Green Bay wanted to happen didn't happen.  DA quickly notices that Gaines is wide open, and checks down with an accurate, easy to catch pass 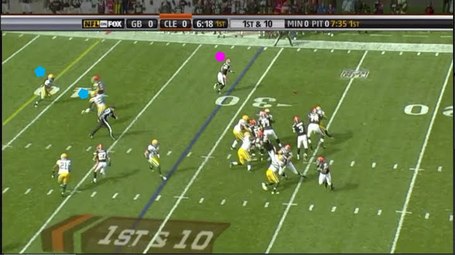 The ball has some touch on it but is still thrown with enough zip that Gaines is able to catch it in stride with enough space between him and the sideline to secure the ball and turn upfield for a nice gain. 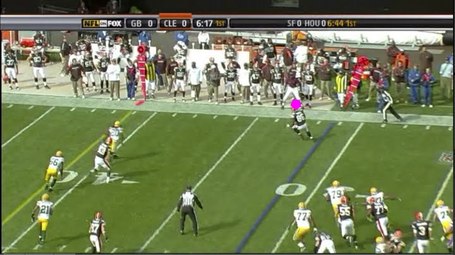 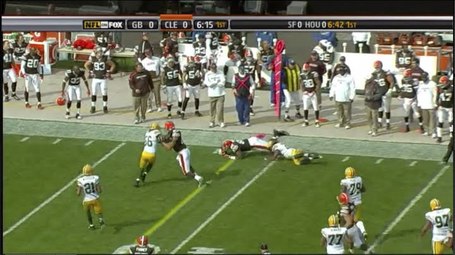 Later in that same drive, we lined up in a strong I formation with Massaquoi and Robiskie at WR, Estandia at TE, and Vickers and Lewis in the backfield.  Green Bay showed a Cover-3 shell before the snap (again), by walking CBs Al Harris and Charles Woodson back before the snap. 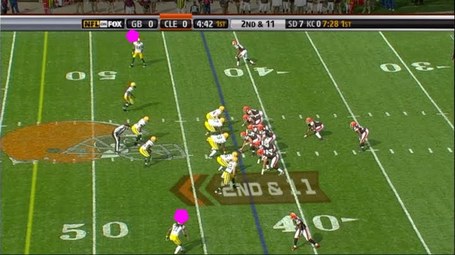 Green Bay was walking a safety up into the box all day and basically daring our WRs to beat them through the air.  Anderson notices and makes a check: 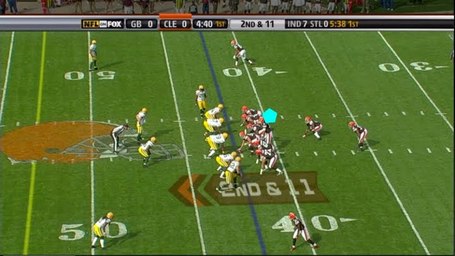 After the snap Anderson, FB Lawrence Vickers, and RB Jamal Lewis all do a great job of selling a little play-action fake.  It isn't a full on "stick it in his gut and pull the ball back out" fake, but with a quick twitch by DA and good salesmanship by Vickers and Lewis, Woodson bites. 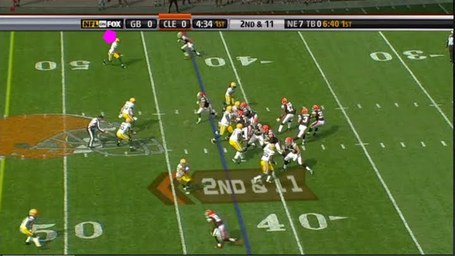 Above, you can see Woodson take one false step, and that's all the Browns needed.  DA sees that Robiskie has Woodson beaten, but he also notices FS Nick Collins coming over from his centerfield responsibility (out of screen) to cover Robiskie. 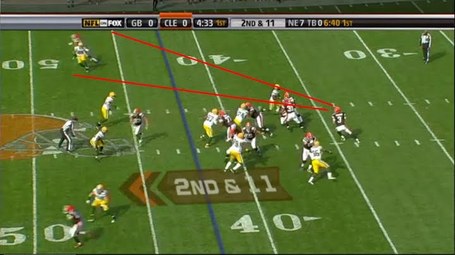 DA knows that with the free safety out of the picture, CB Al Harris is truly on an island against Massaquoi.  He also knows that because GB is playing a Cover-3, Massaquoi should be wide open on his route, a slant/deep in. 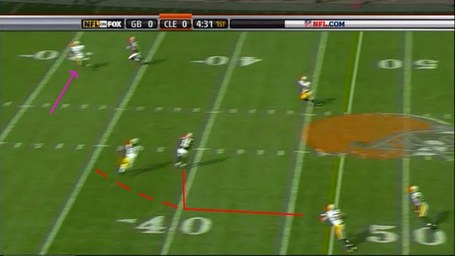 DA throws a great ball, right on Massaquoi's numbers. 20 yards, a first down, and a facemask penalty for good measure. 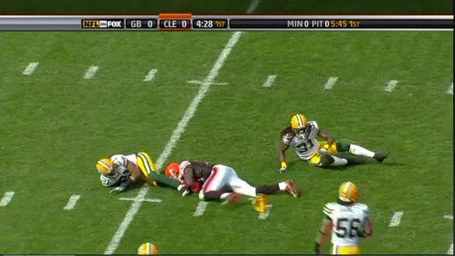 After a very brief review of what is and isn't working for the Browns' offense, here are my reccommendations: