Share All sharing options for: Kamerion Wimbley and Browns Defense Play With Fire Despite 30-6 Loss to Bears

As far as I'm concerned, the Chicago Bears played no better against the Cleveland Browns than they did against the Cincinnati Bengals two weeks ago when they lost 45-10. QB Jay Cutler supported my point that he's a tad overrated, but he was rewarded nonetheless with a rather easy 30-6 victory over the Browns.

Has a Browns team ever been so helpless on offense? I guess you could technically say we're at the same level as the Oakland Raiders, but that's not the type of competitive comparison I want to be making on gameday. The funny thing is that if our offense would've just taken a knee on every series this week, we probably only would have lost by a score of 10-3 (note: I realize that is not a reality, since the space-time continuum obviously would've resulted in different production for the Bears). Our defense played much better than last week and weren't rewarded for it; as far as the rest of the league is concerned, our defense is still a joke.

Let's get to the sad review of the game... 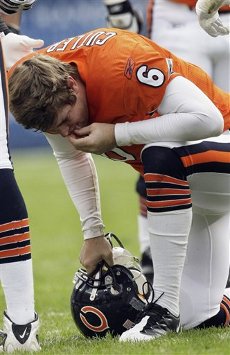 Bears QB Jay Cutler was hit hard all day by the Browns defense, including here by LB Kamerion Wimbley. 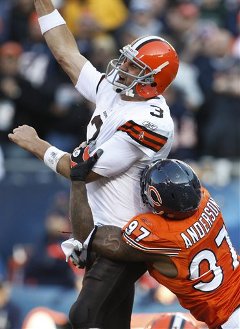 When you see this on TV, chances are the pass is going to be picked.

Up next, the Browns have a Bye week before coming back home the following week against the Baltimore Ravens on Monday Night Football. It should be an interesting two weeks though; let's hope that Randy Lerner comes through with some form of positive news, whether it be the firing of Brian Daboll or the hiring of a team president.