Lions Stun Browns With No Time Left for 38-37 Victory

Share All sharing options for: Lions Stun Browns With No Time Left for 38-37 Victory

I didn't think I could get that "giddy" or "nervous" feeling about the Cleveland Browns again this season, but I did. For the first time this season, our offense came alive -- so much to the point that the team scored 37 points, which seems like more points than they've had all season.

Unfortunately, Rob Ryan couldn't get the defense to perform at a high level, and as the clock read double zeros, the Browns fell to 1-9 while the Lions improved to 2-8.

Let's get to the review of a contest finally worthy of calling a "football game"... 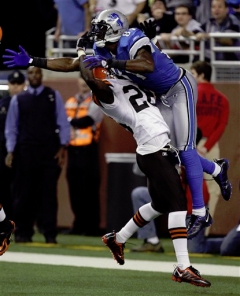 The Browns were flagged for pass interference on Stafford's heave to the end zone.

Next week, the Browns will take on the Cincinnati Bengals, a team that was just upset by the Oakland Raiders. We took Cincinnati to overtime the last time we met, but this time Quinn is in charge of the offense. I'm not getting my hopes up about our offense, but I'm definitely looking forward to seeing whether we can actually build upon our confidence, or if the breakout performance was merely indicative of the lowly Detroit Lions.