Despite All the Talent, We Can be Thankful for Braylon Edwards' Departure

Share All sharing options for: Despite All the Talent, We Can be Thankful for Braylon Edwards' Departure

Everyone loved the season that Braylon Edwards had back in 2007. He had the chance to build upon that momentum the following year to have his name be synonymous with "success" and the modern-day Cleveland Browns. Instead, he developed a case of the "dropsies" week after week. Edwards couldn't regain his focus and when the fans were upset with his lack of production, he didn't respond well. He whined. He complained. He moaned.

At the time, it looked like Edwards was moving into a much better situation. In Edwards' four games with the Browns, he only had 10 catches and was held without a touchdown. The Browns were 0-4, while the Jets were an impressive 3-1 (their only loss coming to the New Orleans Saints). Since the trade, Edwards' attitude and production haven't changed.

Edwards has yet to amass 100 yards receiving in a single game with the Jets. The most catches he had was five, and that was in his first game with the team. Last week in a pivotal game against the Patriots, Edwards' line was one catch for 10 yards. More than the lack of production is the fact that he's still dropping the football, even if he has been a bit better. Edwards took some heat for dropping important passes in each of the Jets' past two games. 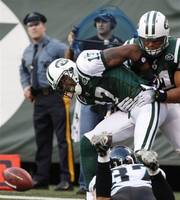 Situation One - Against Jacksonville Two Weeks Ago: The Jets took a 22-21 lead with five minutes left in the game. Needing a two-point conversion to push the lead to a field goal, Mark Sanchez went for Edwards, who dropped the ball. The Jaguars later hit a game-winning field goal as time expired. Edwards' response to the fact that he dropped the ball on the play?

"Oh, where I almost got my ribs broken?" he said of the latter play, claiming it wasn't a drop because the shot he absorbed from S Reggie Nelson.

Situation Two - Against New England Last Week: Early in the game, the Jets went for Edwards on third down and he didn't hold on to the ball. While the Jets didn't end up being in the game, if Edwards makes the catch and continues the early drive, maybe they could've altered the tempo of the game. Edwards' response?

Asked about the "tipped" pass he failed to secure against the Patriots, Edwards replied, "Oh, the tipped ball? Key words: Tipped ball."

Former Browns teammate Leigh Bodden had more catches (three interceptions) than Edwards did for the Patriots. Edwards obviously was tired of the criticism he faced in Cleveland about his drops, but the excuses have continued with the Jets. Seriously, how often do you hear another receiver in the league go to such extent to make excuses about not doing their job? On top of that, it's quotes like this one in the New York Daily News that make me thankful that Edwards is no longer with the Browns:

Despite the losing, Edwards said he's happier with the Jets than the Browns.

"I knew the pits," he said. "This is nothing like the pits."

Granted, in that quote, he didn't specifically label Cleveland as "the pits." He could've meant the other areas he lived in when growing up, but I think we can read between the lines pretty clear.

Edwards might be able to draw the double teams, but his presence wouldn't have changed the lack of production our offense has had since his departure. Last week against the Detroit Lions, we finally got a taste of what his replacement, Chansi Stuckey, can bring to the table. Maybe things will change, but in the weeks he didn't have the ball thrown to him or that he dropped the football, I didn't hear any excuses from Stuckey. When Brady Quinn finally had his shining moment last week, Stuckey contributed, catching one deep ball for a touchdown and fighting for yards after the catch in two third-down situations.

Edwards probably won't produce enough to bump our conditional draft pick up to a second-rounder, but we'll still have a third-rounder to show for him come next April. Maybe it's because we've been consumed so much with how atrocious Brian Daboll's playcalling has been, but hasn't it also been nice not having to put up with Edwards' antics anymore? Have fun in New York, Edwards. Browns fans know about receivers who can't hold onto the football. In that sense, Edwards has been and always will be exactly like the pits.