Fans Choice Hall of Fame Voting - Which Browns Are On the List?

Share All sharing options for: Fans Choice Hall of Fame Voting - Which Browns Are On the List?

The NFL has teamed up with Van Heusen and JC Penney for the first "Pro Football Hall of Fame Fan Vote." Although the voting process will not have any effect on the actual Hall of Fame voting this year, it shows some added interest from the league to see what fans think.

Currently, Jerry Rice, Emmitt Smith, Cris Carter, Shannon Sharpe, and Otho Davis are at the top of the list. How far do you have to search for some candidates from the Cleveland Browns?

Please note that this is a sponsored post, but these days, what Browns fan wouldn't like to think back to some of the better days? 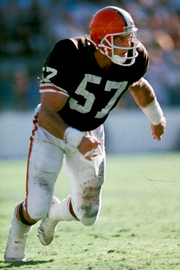 #54 - LB Clay Matthews - The talented linebacker played for the Browns from 1978 until 1993. His son, Clay Matthews III, was drafted by the Green Bay Packers this season.

#61 - Owner Art Modell - It's a shame he's this high up the list. I don't think any Browns fans will be showing the beloved Modell any support.

#82 - DL Michael Dean Perry - The media-friendly defensive lineman played with the Browns from 1988 until 1994. How could you not vote for a guy who had a McDonalds sandwich named after him?

#94 - RB Greg Pruitt - Playing for the Browns from 1973 until 1981 and made four Pro Bowls with the team. He won a Super Bowl when he joined the Los Angeles Raiders. Wouldn't it be nice to have a running back in these days -- or any player for that matter -- be on the roster for nearly a decade?

#99 - DB Frank Minnifield - Those were some good times, having Minnifield and Hanford Dixon as the Browns' cover corners. Minnifield only played with the Browns, with his career going from 1984 until 1992.

Feel free to relish in the history of these Browns players. There were a few players who only played a year for the Browns that I left off; if you see any "legendary" members that I left off the list, please let me know.

To support our Browns, go here to cast your vote. The results will be announced on the NFL Network hours before the official results are unveiled. Our players might seem far down the list, but that might be because the awareness factor of this voting process is low. If we show some support, a few of our players could quickly start to rise up the list!