The Regression of Derek Anderson, by the Numbers

Share All sharing options for: The Regression of Derek Anderson, by the Numbers

From 2007 to 2009, Derek Anderson's performance has clearly declined. He's always had the same weaknesses, but they've become more prominent this season -- to the point that he should be deemed as one of the worst starting quarterbacks of all time. 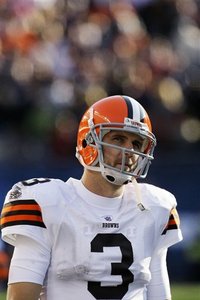 All of the categories have either gone up or down, but all of them have the same theme: a dropoff in production. Completion percentage has declined to an unimaginable 40%. The yards per attempt category, something you'd expect to be higher for a gunslinger like Anderson, is nearly half of what it was in 2007.

The number of interceptions has remained constant, but the touchdown differential has taken a major swing downhill.  Anderson's also fumbling the ball more often.

Can you believe there were hopes that we could trade Derek Anderson for a first-round draft pick after the 2007 season? If there was ever a time to sell, that was the time. With the eggs that Anderson has laid the past two years, I think teams would laugh if it were suggested they even give up a seventh-round draft pick.

More importantly, when looking at the past two years, this is the type of production that has kept Brady Quinn on the bench? Thanks again, Romeo Crennel.

Memo to Eric Mangini: although Quinn struggled to start this season, Anderson isn't going to get any better. At least give Quinn half a season to prove himself before such a drastic decision -- drafting a quarterback in the first round of the 2010 NFL Draft -- is made.