A look back: The Dawg Pound

Share All sharing options for: A look back: The Dawg Pound 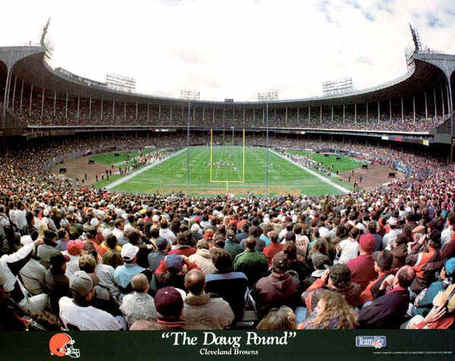 Hanford Dixon and Frank Minnifield had no idea how deep their impact on a fan base would be.

The Dawg Pound didn't start in Cleveland, it was born in Kirtland, Ohio.  Lakeland Community College was the location of the 1985 preseason camp of the Cleveland Browns.

Most people have heard the saying of a QB playing "cat and mouse" with a defense.  Making calls and audible's based on what the defense is showing, etc.  Dixon and Minnifield had an issue with this.  They didn't wan't to be known as mice.  The decided they wanted to be the Dog in the fight.  This lead to the defensive players barking when they made positive plays in camp.

The fans caught on.  As soon as the defense made a good play on defense, not only were the defensive players barking at one another, but the fans watching camp would start to bark.  The ground work was laid.

Before the Browns first preseaon game, Dixon and Minnifield hung a banner in front of the east end zone bleachers.  These bleacher seats were the cheapest seats in the whole stadium.  These were the centerfield seats when the Indians played home games.  They were cheap because you didn't really get a seat.  It was a wood bleacher that was 6" by 21".  It didn't really matter, you never sat down anyways.  It was the only section of the stadium that didn't have an overhang for protection of the elements.  These bleachers were close to the field, the fans being held back by only a small chain linked fence.

The fans embraced it.  I don't know if it was because the Browns finally had some sort of mascot, or it was just a badge of honor to be a ticketholder of a Dawg Pound seat, but it became synonymous with being a Browns fan.  I am sure we have all heard tales from other Browns fans about what they saw/heard/did in those bleachers.  The fact that these were the "cheap seats" gave the team a blue collar feel.  Being Cleveland, that feeling was well received.  You attend sporting events now, the close seats are always filled by suits and people on their cell phones, waving into the camera asking if their kids can tivo the game so they can see themselves when they get home.  That wasn't the case in the Pound.  You were amongst other fans that understood football and knew what it meant to be good fans.  It didn't matter if you knew the people around you, you knew they were Browns fans and that they thought Pittsburgh sucked.  What else do you need for a friendship?

(Personally when I went with my father as a 10 year old, I was told on numerous occasions "don't tell your mother" when I asked if I could eat a milkbone or give Sam Wyche the bird during pre-game warm-ups.  Rules were relaxed in the pound.  Yes, I heard profane language and listened to men say that they would do vulgar things to opponents mothers, but there was no army of ushers to ask anyone to quiet down or leave.  It was allowed because this is what you signed up for when you saw a game in the Dawg Pound.  Why does an entire stadium have to be PG?  If you take a child to a NFL game, they should be ready for some adult words.  *Rant over, thank you*)

It was a dump.  Seats sucked.  Standing on concrete in freezing temps made you appreciate cardboard more than you ever expected.  But to me, it was the greatest experience I ever had at a live sporting event.  I saw the Browns win in OT over the Minnesota Vikings in freezing temperature.  Wouldn't trade it for anything in the world.

I have only seen one game in the "new" Dawg Pound.  It just wasn't the same for me, but in all fairness, nothing will ever be able to match the mystique of the Pound.

What was your favorite Dawg Pound moment/story/game?  Am I crazy, or does the new pound just lack something?