Share All sharing options for: Jamal Lewis and Brodney Pool Placed on Injured Reserve by Browns

We thought our team wasn't competitive last year when Ken Dorsey was operating our offense. Imagine what things will be like the rest of the way after the injuries the Browns suffered in last week's game against the Cincinnati Bengals.

Lewis going on the injured reserve came out of left field. It is being reported that Lewis, like Pool, also suffered a head injury against the Bengals. Earlier in the offseason, Lewis told the media that this would be his final season in the NFL. If he holds true to his word, then his career will not have ended on a bright spot. The Browns are currently tied for the worst record in football at 1-10, and on the season Lewis was averaging a mere 3.5 yards per carry without a single touchdown. While our quarterbacks weren't efficient enough to give Lewis enough opportunities, Lewis never appeared to hit the hole very well this season.

With the three injuries, that means there will have to be some shifts in the starting lineup this week against the San Diego Chargers. Among my predictions...

Ideally, I'd love to see Harrison receive the opportunity to start again, but based on the recent events of the past few weeks, I don't think that's what Eric Mangini has in mind. 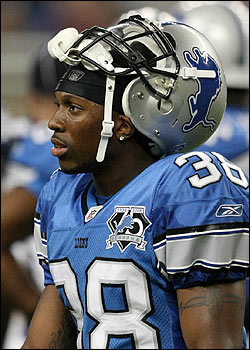 The Browns have already claimed DB Ramzee Robinson off waivers from the Philadelphia Eagles. If the name sounds at all familiar to you, then perhaps you remember him as bring the Mr. Irrelevant of the 2007 NFL Draft when the Detroit Lions selected him. Yep, we can now brag that we have an irrelevant player. He only has 24 tackles in his NFL career, but drew some laughingstock criticism last season with the Lions:

Before we get to the particulars, let me make sure you know about the player of the day. I speak, of course, of Ramzee Robinson. In the second half at Green Bay, Robinson, a Lions defensive back, was penalized for taunting. The Lions at that point were 0-15 and within sight of attaining the designation they now hold, that of worst NFL team ever. After a Green Bay incompletion, Robinson danced around, pointing at himself and taunting Packers receiver James Jones. A player for the worst-ever NFL team was called for taunting in the game in which that team reached 0-16.