A Look Back: The Greatest Punt Return Game Ever.

Share All sharing options for: A Look Back: The Greatest Punt Return Game Ever.

You know what this is. 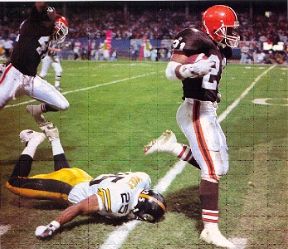 Touching Eric Metcalf on a punt return kills you immediately.

I was going to look at the impact of Paul Brown and football.

Then Josh Cribbs took me back to one of the best afternoons of my young football life.

Eric Metcalf shouldn't have played.  He injured his right knee in the previous weeks win over the Bengals.  He missed practice on Monday, Tuesday, Wednsday and Thursday.  On Friday he did nothing but a light walk through.  In today's NFL world he would have been declared doubtful (although our coach was Belichick, so maybe not).

On Friday he told Cleveland Browns owner (I refuse to add his name to such an amazing tale) "I'm playing in the Pittsburgh game. I'm just not going to miss that."

First place was on the line between the 4-2 Browns and the 4-2 Pittsburgh Steelers.

The Browns struck first with a 62 yard TD pass from Vinny Testeverde to Micheal Jackson.  7-0 Browns.  Steelers took the ball and didn't move it much.  4th down on their own 40.  Cowher sends in the punt team.  Mark Royals booms a 51 yard beauty.  Maybe it was too good.

Metcalf catches the punt at his own 9 yard line in front of the Dawg Pound.  Brings it up to the 21 yard line, side steps a Gary Jones tackle and takes off down the left sideline.  It was an absolute thing of beauty.  14-0 Browns.

Start of the second half.

Steelers get a FG from Gary Anderson.  17-14 Steelers.

Vinny leads our bunch back down the field and throws his second TD pass of the game to all-world Ron Wolfley (one of only 2 receiving TDs of his career).  Browns again ahead 21-17.

The Steelers moved the ball all game.  They accounted for 440 yards of offense.  Their problem was that they weren't getting any touchdowns.  The Browns defense was playing the well known, but always nerve wracking, bend but don't break defense.  Again, the Steelers drive but can only get a 46 yard FG out of Anderson.  21-20 Browns.

On to the 4th quarter.  The Steelers once again go deep into Browns territory.  But the Browns defense keeps the Steelers out of the end zone, but relinquishes the lead 23-21 Steelers on another Anderson FG, this one a 30 yarder.

Browns get the ball back.  Vinny Testeverde gets crushed on a hit an injures his throwing shoulder.  Off the bench comes Bernie Kosar.  He went 1-2 for 7 yards passing.  Even Bernie couldn't get the Browns offense in motion.  They had to punt again, for the fifth and final time of the night.

The Steelers needed a first down, maybe two, to run out the clock.  The Steelers had gone up and down the field all game long.  It would be a tall task for the Browns defense to come up with a three and out.  Cowher went power football and ran Barry Foster on first and third down forcing a third and short.  Cowher could have gone play action to TE Eric Green, but he went the safe route and pounded it again with Foster.  Browns defense rose up and stopped Foster short.  3 and out.

Just over two minutes remained.  The Browns were down to their back-up (but still kick ass) QB.  They hadn't moved the ball at all in the fourth quarter.  But Royals still had to punt the ball to Eric "MF'n" Metcalf.

4th and two, from the Steelers 22.  Steelers punting and again Royals drilled another beauty.  Maybe, like the other punt, he just kicked the ball too far.  The Browns had called for a return right.  Metcalf caught the punt at his own 25 yard line.  He easily outruns Reggie Barnes and Victor Jones and gets to the right sideline where he picks up the wall of Browns blockers.  Deon Figures dives for his feet.  James Jones hits Mark Royals so hard that the punter flies backwards into Eric Metcalfs path to the endzone.  No freakin' way a punter will tackle Eric Metcalf on this day.  It looked like he changed directions in mid-air when he jumped over what I believed to be the now dead body of Mark Royals.  All that was left was for our tiny hero to turn on the after burners for the last 20 yards as Yancey Thigpen and the already mentioned Gary Jones tried to catch him from behind.

Metcalf crossed into the endzone as Tom Hammond crapped his pants on-air.  He kept running right into the arms of the waiting Dawg Pound.

The Steelers turned the ball over their next possesion and the Browns ran the clock out.

Bernie was back.  The Browns were in first.  Things were awesome.

This was the last great moment of Cleveland Browns football for that season.  We didn't know it at the time, but this would be Bernie's final win as a Cleveland Brown.  Bernie was cut two weeks later.  The Browns finished the season on a 2-7 skid.

It comes with the territory of being a Browns fan.  Just when you think things are going well, the other shoe doesn't drop, it kicks you in the nuts.

But for one Sunday that season, the Browns were on top of the mountain.  We as Browns fans have Eric Metcalf to thank.