I wonder if a team has ever had as bad of cumulative quarterback statistics in the three games the Browns have won this year. This past Sunday, Brady Quinn was threw for just 66 yards and 2 interceptions, and yet the Browns put up their highest point total of the season. Quinn won't be able to play for the final two games, but I'll still judge his performance from the game as if he was still playing.

Let's get to the full review of the game, starting with the game balls for the second week in a row... 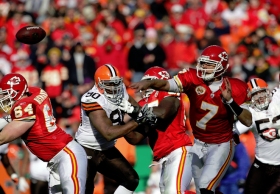 Matt Cassel and the Chiefs put up nearly 500 yards of offense against the Browns' defense.

Next up, the Browns take on the Oakland Raiders, where we will see an epic battle between Derek Anderson and Charlie Frye. Unless you're in the Cleveland or Oakland areas, CBS is not showing you this game.