A Look Back: Clay Matthews

Share All sharing options for: A Look Back: Clay Matthews

A look back at one of the best Browns linebackers ever. 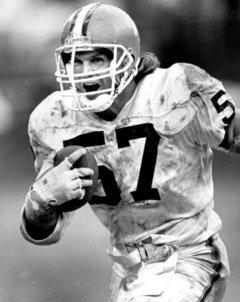 Awesome hair for an awesome linebacker.

Clay Matthews played college ball at University of Southern California.  He was a member of the 1974 national championship team and earned All-American honors in 1977.

He was the first round draft pick, 12th overall, in '78 by first year head coach Sam Rutigliano.

Matthews appeared in 15 games that season, starting two.  Not exactly earth shattering but he was just getting started.

The following season Matthews started all 16 games for the Browns at ROLB.  Only a broken ankle in the strike shortened season of '82 could keep Matthews out of the Browns starting line-up.

Matthews really seemed to come into his own when the Browns hired a Detroit Lions LB coach as the Browns new defensive coordinator.  That coach was Marty Schottenheimer.  Marty used Matthews better than any coach before.  Matthews was all over the field.  He was racking up 100 plus tackles and God knows how many sacks (Sacks didn't become a NFL stat until the '82 season).

Matthews had one of the best NFL seasons ever in 1984.  He had 126 tackles, 3 forced fumbles, 1 fumble recovery and 12 sacks.  By the way just to give you an idea, James Harrison won the defensive POY last season with 103 tackles, 7 forced fumbles, 1 fumble recovery, and 16 sacks.  (The difference in FF stands out, but remember that LT invented the strip sack move in the mid-eighties.  Matthews essentially didn't have the move in his arsenal).  Pretty close huh?  Clay Matthews didn't even make the Pro Bowl in 1984.

He finished his Cleveland Browns career (he went on to play 3 games as an Atlanta Falcon were he recorded 6.5 sacks as a 40 year old) with 62 sacks (No telling how many he missed out on during the four seasons in which sacks weren't tallied), 1,430 tackles, 24 forced fumbles, 14 INT's, 14 fumble recoveries, and two defensive TD.

He played with the Cleveland Browns for 16 seasons, only trailing Lou "the toe" Groza for the most seasons a Brown.  Matthews played in 278 games which is still good for 12th all-time, but 7th among non-kickers.

Clay Matthews should be in the Hall of Fame.

The Matthews family once appeared on Family Feud, hosted by Richard Dawson.  He, along with brother and longtime offensive lineman Bruce, were chosen to play in the final round.  One question he was asked was "What is the ideal age for a President?"  He gave 35, but a person can't be President until they turn 35.  They didn't win the grand prize.  Matthews owned a Pontiac dealership in Cleveland in the early 90's.  Clay Matthews III is a rookie OLB for the Green Bay Packers.  Casey Matthews is a LB with the University of Oregon.  So keep an eye out for him chasing Pryor on New Years Day.