After the promising game the Browns offense had versus the Detroit Lions a few weeks ago, this past Sunday's effort against the Cincinnati Bengals was another disappointment in a dismal 1-10 season.

Considering the number of players now being stockpiled on the injured reserve, the tone of certain parts of this review had to be adapted to account for that (i.e. it's not worth pointing out that Jamal Lewis had a lackluster game considering his career is basically over).

Let's get to the full review of the game, starting with the goat of the game... 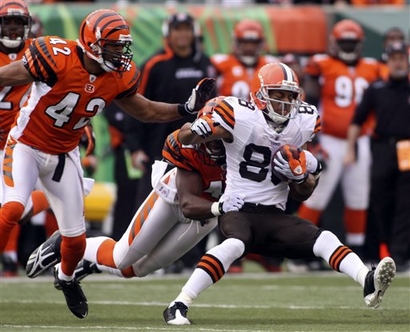 The Browns' receivers only found some success on a few quick reads from the slot.

Next week, the Browns will take on the San Diego Chargers. The Chargers are one of the hottest teams in football, and the Browns haven't shown any sign of even being close to a spoiler team. Given the number of injuries we have, we're clearly the worst team in football. The only things left to gain from this season are more experience for Quinn, and seeing if either Jennings or Harrison can contribute at running back next year.