Share All sharing options for: Not a Warm Homecoming for Charlie Frye as Browns Defeat Raiders 23-9

Record-wise, the Cleveland Browns will finish no worse than they did last year during Romeo Crennel's final year as the team's head coach. Granted, going 4-12 or 5-11 is nothing to brag about, but the optimist can certainly be pleased with how the Browns have come together and played at a higher level during the second half of the season, leading to the team's current three-game winning streak.

Let's get to the full review of the game, starting with the game balls for the third week in a row... 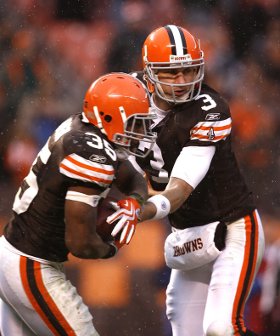 Next up, the Browns take on the Jacksonville Jaguars in the final game of the regular season. It'll be a long offseason for Browns fans, but at least we've had a pleasant December to reflect back on.