Browns Border on "Respectability" in 30-23 Loss to Chargers

Share All sharing options for: Browns Border on "Respectability" in 30-23 Loss to Chargers

Sure, I could lecture the defense on how pathetic it was to give up a 66-yard touchdown pass, mostly via the catch-and-run type. Or, I could complain that despite the amount of time our defenders had to adjust to the jump balls thrown by Philip Rivers, Antonio Gates always came down with them. It wouldn't be fair to complain about our defense though, as the unit is barely representative of the one that started the season. From the first week, I believe only Eric Wright, Abram Elam, and Kamerion Wimbley are healthy enough to stay at their positions.

What bordered on respectability was the play of the offense. Although we only scored seven points in the first three quarters, we had several "threatening drives," which shows progress compared to the numerous three and outs we've been accustomed to.

Let's get to the full review of the game, starting with the goat of the game... 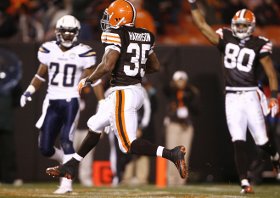 Jerome Harrison found his groove against the San Diego Chargers, scoring twice in the fourth quarter.

Thursday, the Browns take on the hated Pittsburgh Steelers. The Steelers are vulnerable right now, having lost four straight. It's been awhile since a Browns coach has been able to defeat the Steelers, and Mangini has the opportunity to officially put a dagger in Pittsburgh's playoff hopes.