Share All sharing options for: Gold Star for Mangini's and Kokinis' First Transactions

As most of you know by now, the Cleveland Browns released several players on Monday. Monday was the first day that teams were allowed to start disposing of their players, and Eric Mangini and George Kokinis made moves towards improving the future of this team. In other words, they didn't get it "wrong". 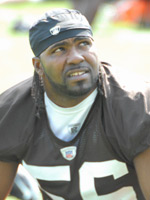 SB Nation is in the process of compiling the most complete and accurate list of free agents in the NFL, as many sites have outdated or inaccurate reports. When that becomes available, I'll post it for everybody to see and discuss.