Should Houshmandzadeh be High on Browns' Radar?

Share All sharing options for: Should Houshmandzadeh be High on Browns' Radar? 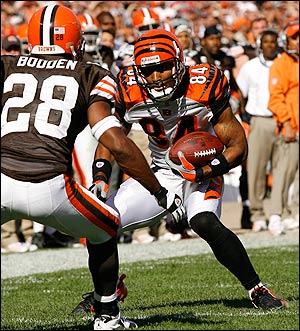 The Cincinnati Bengals slapped the franchise tag on kicker Shayne Graham yesterday. This is not unheard of, as the New England Patriots did it twice with Adam Vinatieri in the past. However, considering the state of the Bengals, the concept of franchising a kicker has to make you chuckle.

The more important part is that T.J. Houshmandzadeh will not be franchised, meaning he'll hit the free agent market on February 27. A former seventh-round draft pick, Houshmandzadeh will likely require a large contract. Many teams will reach out for his services -- should the Browns be one of them? Our defense needs to be rebuilt at several positions, but that also shouldn't distort the fact that our offense was one of the worst in the NFL last season, despite our expectations being high week in and week out.

I want a receiver of Houshmandzadeh's caliber, but it's probably better for Eric Mangini to take a "chance" route. We've seen guys like Houshmandzadeh and Marques Colston succeed after being seventh-round draft picks. The Browns have had their failed attempts in earlier rounds with players like Quincy Morgan, Andre King, Travis Wilson, and presumably Syndric Steptoe. The jury is still out on Paul Hubbard, but you can't like his odds under a new regime either. With our lack of scouting early on this year due to a late-hired front office though, finding one of those gems might truly be pulling a name out of a hat.