Share All sharing options for: Sean Jones: Too Expensive for Franchise Tag? 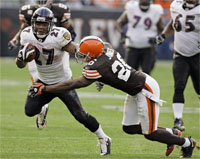 I always find the RotoWorld feed on the left of the front page of Dawgs By Nature to be useful for Cleveland Browns news. Anything that appears in blue text is a side comment made by the anonymous author who submits the tidbit. Every so often, one of the lines just irks you:

The franchise number for safeties is $6.342M. [Sean] Jones is coming off an injury-plagued up and down season, but he's easily the best player in Cleveland's awful secondary. If he makes it to the open market, Jones will be one of top three or four safeties available.

The tidbit refers to a Plain Dealer article this morning, claiming that the odds of the Browns using the franchise tag on safety Sean Jones are not very good. For those of you wondering exactly what the franchise tag does, here's a summary in brief (specifically in Jones' case):

Did Jones' effort last season, or over the past several seasons, earn him a one-year usage contract? It is something that Mangini and Kokinis should consider, depending on if they believe they can find a viable replacement in free agency or the draft. By keeping Jones, you scratch one position off the list of things to worry about in year one, while reducing the cap room available for other positions this offseason. If we do plan on paying off Derek Anderson's $5 million bonus in order to make him more marketable in a trade, then I think you can definitely rule out franchising Jones.

At this time, rumors have not indicated whether the Browns would make a serious new contract offer altogether to Jones to keep him with the team for a longer period of time.

Back to the introduction of this article, the line that irked me in RotoWorld's piece was the following: "he's easily the best player in Cleveland's awful secondary". Our secondary was projected to be awful prior to the start of last season, but the unit as a whole performed better than our defensive line and our linebackers. In ranking our secondary, I'd put Eric Wright far ahead of Jones on a priority list. The Browns ranked 14th against the pass last season and 28th against the run.