Shaun Rogers Wanting Out of Cleveland: Fact or Fiction?

Share All sharing options for: Shaun Rogers Wanting Out of Cleveland: Fact or Fiction?

Shortly after Eric Mangini was hired as the head coach of the Cleveland Browns, reports indicated that he got off to a bad start with defensive tackle Shaun Rogers by not saying "hello" to him on two occasions.

According to a report Monday by NFL.com's Adam Schefter, Rogers still isn't happy. In fact, the situation could be so extreme that Rogers has asked the Browns not to pick up the $6 million option-bonus he is due next month. Would Rogers be so upset that he would pass up the $15 million in future bonuses he is currently scheduled to make?

Cleveland has no intention of getting rid of Rogers. It wants him back as the productive team member he was last season, when he was selected to the Pro Bowl. Browns coach Eric Mangini, according to those within the Cleveland organization, is still optimistic that he can change Rogers' mind once the two men speak. Mangini is said to have recently reached out to Rogers. Those who know Rogers say his mind will not be changed.

Besides the obvious fact of why the Browns would not want to get rid of Rogers (he's one of the best defensive tackles in the NFL), there's another big reason: if released, it would result in more than $9.7 million against the team's salary cap. I know I keep stressing this, but if we're going to pick up Derek Anderson's $5 million bonus, we can't afford to throw away money anywhere else. 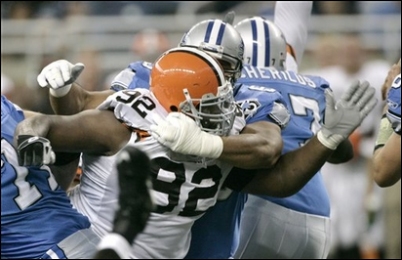 Schefter cites a similar incident occurring in New York when Mangini first took over the Jets:

But Mangini has had success in these types of settings. When he arrived in New York as the Jets' coach in 2006, wide receiver Laveranues Coles was, at best, a skeptic, but Mangini eventually won him over.

Now then, here comes the real question: does this entire story seem believable? Sure, maybe Rogers was a little frustrated that he wasn't acknowledged by the new management. But to form an attitude of "release me of my contract now" because of it?

Maybe because he put up with so many years of the Detroit Lions being so unappreciative of him, he senses something similar about to develop in Cleveland. Hopefully that's not the case -- Rogers is the heart of our defense right now and the only reason we can focus on addressing the linebacker position instead of the defensive line in Mangini's first year.