It's time for Part I of the Dawgs By Nature Review of the 2008-2009 Cleveland Browns season -- the top 5 worst moments of the season. I wrote the same piece last year, and at the end of the article, I had the following quote:

"That's it -- the worst moments from the season are officially out of my system. I can't wait to see what Phil Savage has in store for this offseason, because he's delivered fairly well the past two years."

Savage did have the right intentions in the mind by making deals for linemen Shaun Rogers and Corey Williams, but it was his extracurricular antics that are the reasons I can't repeat that statement this season. Those antics will not be part of this piece, because the only things to be highlighted here are events that occurred during the games. I'll start with No. 5, counting my way down to the worst moment of the season:

ON THE BUBBLE MOMENTS 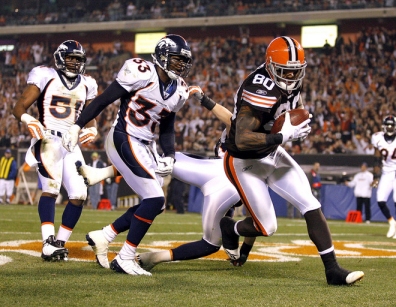 I can only remember one instance in which Derek Anderson completely took charge towards the end of a game and led the Browns to victory -- three seasons ago against the Kansas City Chiefs, when he spelled Charlie Frye due to injury. Other than that, Anderson's comeback attempts would typically lead to a 50+ yard field goal attempt by Phil Dawson at best. When Brady Quinn made his first career start against the Denver Broncos, that was supposed to change. After building a pretty sizable lead early on, Jay Cutler tore apart our defense in the fourth quarter with 21 points on three touchdown passes.

The Browns needed a touchdown with only a little over a minute left on the clock, and with Quinn's stellar performance on the day thus far, a comeback certainly seemed possible. The first play started well -- a 9-yard completion to Kellen Winslow. The next two passes fell incomplete though, setting up fourth-and-one. Quinn dropped back to pass again, this time firing a short strike to Winslow. Sadly, the pass went through Winslow's hands, and the game was over. It definitely left a burn at the time, because we had just collapsed to the Baltimore Ravens four days earlier. Experiencing a big letdown twice in such a short span was deflating.

With the Browns up 23-13, things were looking good. We had held one of the league's high-scoring offenses to a fairly low total, and our offense had just finished a nice, time-consuming drive that lasted seven minutes. We ended up punting, but we were winning the field position game as the Broncos were pinned back at their own 7-yard line.

What came next was a combination of too risky of a defensive call and an individual mistake: we played single coverage with zero safety help up top against Eddie Royal. Cutler dropped back and fired a strike to Royal, who was able to beat Brandon McDonald for an easy 93-yard touchdown. The play set up several weeks of McDonald being scrutinized for his gameplay, though fortunately he ended up rebounding before the end of the season.

It was the ridiculous number of drops -- not the fact that he was a "Michigan" guy -- that caused fans to ridicule Braylon Edwards all season long. I'm not talking about simple drops that don't have a big impact on the game either; I'm talking about the wide open 50-yard touchdown type of drops. Tied against the Baltimore Ravens in the fourth quarter of our second matchup of the season against them, Edwards had a couple of steps on his man deep down the field. Anderson threw a perfect pass, but Edwards could not haul it in. If Larry Fitzgerald dropped that type of pass (which, based on his playoff-long performance, he wouldn't), you would see him furious at himself on the sideline but ready to make up for it when given another chance.

Braylon, on the other hand, often seemed to look towards other players and even the fans to blame. If Edwards holds onto that ball, dare I say it, we might not have had a new regime this season. Our record would've been different, Anderson would've started against Denver (and not suffered the injury he did against the Colts; the course of time would've been altered), and who knows how things would've gone. It'd be ridiculous of me to say we would've made the playoffs, but we could've put a huge dent in Baltimore's playoff hopes while finishing with a manageable 7-9 or 8-8 record.

2. DOWN 3 POSSESSIONS, CRENNEL SENDS FG UNIT OUT IN OPENER

Romeo Crennel was never "over" with the fans for his game-management skills, but we knew right off the bat in the first week of the season that we were doomed. The anticipation heading into the season was "off the charts". We were facing the Dallas Cowboys in FOX's nationally televised timeslot.

Things had not started well in the game, and we found ourselves down by three possessions partway through the fourth quarter. Being down 28-7, it was clear what we needed: three touchdowns. Instead, Romeo Crennel sent out the field goal unit on fourth-and-six from the 23-yard line. The fans booed louder than I had remembered them booing in a long time. After the play, guess how many possessions we were down by?

We might as well have taken a knee instead of trying the field goal. By the way -- we never got the ball back, as Tony Romo finished the game with a 10+ minute drive against our defense.

Losses hurt most when you still believe you have a shot at the playoffs. Heading into the game, we were 3-4. No matter how the end of the season went, if we would've been 4-4 at the halfway point of the season, the hope still would have existed. After the defense collapsed, Derek Anderson had one more shot to bring us back.

In the process of being pressured on a designed screen pass, he got rid of the ball -- perhaps earlier than the play called for -- and the pass was intercepted by Terrell Suggs. Suggs didn't stop there either; he made sure the dagger was twisted too by returning the pick for a season-sealing touchdown. The play also undoubtedly ended Anderson's career* as the Cleveland Browns' starting quarterback.

*And Jason Wright's too, as I blame him just as much for the outcome of this play, as well as many other bad plays this season.

Share your own bad moments from this past season, and if you would've arranged this list differently. Remember, this list was not about moments like Savage emailing expletives or the mishandling of talent by Crennel.