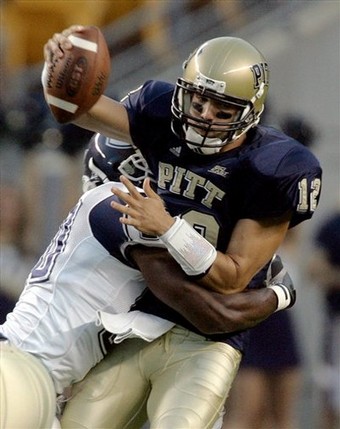 Amidst the start of free agency, the Cleveland Browns acquired an additional second round draft pick for Kellen Winslow. There's no doubt that Eric Mangini and George Kokinis have made it a priority to focus on the draft this year. Looking at our roster, it's hard to imagine the Browns not taking a linebacker with one of their first three picks. Could one of those picks be DE/OLB Cody Brown?

Brown, who played for the Connecticut Huskies the past several years, had discussions with the Browns back at the Senior Bowl, according to agent Nate Haber. With his pass rushing ability (11 sacks this past season and 7.5 sacks the season before), he will certainly be on the Browns' radar this year.

I had the pleasure of submitting many of our community's questions to Brown recently. Here is the interview in full:

Dawgs By Nature: "You're in a draft class that seems to have a lot of depth at the DE/OLB positions. How do you stack up against guys like Maybin, Orakpo, Connor Barwin, Larry English, etc.? Are there things you feel like you can do better than all of them?"

Cody Brown: "Those are all athletic guys. I’m not exactly sure about their strengths and weaknesses. I just know what I’m capable of doing. I guess the scouts will have to determine which one is better than the next."

DBN: "What, if anything, have the scouts said that you need to work on most?

Cody Brown: "Just finishing plays. I haven’t heard too much criticism about my game though. They know I’m an athletic pass rusher who played with my hand to the ground in college. In the pros, I might be asked to stand up and play outside linebacker in a 3-4. They all tell me I can do either or."

DBN: "What teams seemed to be most interested in you at the combine?"

Cody Brown: "I had some great convos with the Panthers, Broncos, Titans, Cardinals, Cowboys, and Giants."

Cody Brown: (laughs) "Yeah that would’ve been nice. The scholarship checks weren’t all that bad though."

DBN: "Which player do you try to mimic? Who is your favorite current player?

Cody Brown: "I like Demarcus Ware’s game. Getting after the quarterback is what I’ll be paid to do."

DBN: "Do prospects such as yourself try to obtain information about the teams that may select you?"

Cody Brown: "Not really. I let my agents handle all that. I just want to play for a team that believes in me."

DBN: "How was it playing with leading rusher Donald Brown?

Cody Brown: "It was cool. We made each other better every day in practice. He’s a talented guy."

DBN: "How many sacks do you have set as your goal for this year?"

Cody Brown: "Hmm…I don’t know. I don’t really have a number. Hopefully I can come in and hit that double-digit mark. I guess that’d be a good start."

I'd like to thank Brown for taking the time to answer our questions. We'll be following his and many other prospects' progress over the coming weeks.