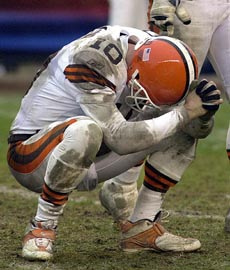 Several years ago, when the Cleveland Browns were in the playoffs against the Pittsburgh Steelers, I recall CB Hank Poteat getting burned consistently by our receivers. He was a large part of the reason Kelly Holcomb threw for over 400 yards in that game. At that time, I thought to myself, "how could this 'Poteat' guy be on any team?"

Well, now he's not just on any team -- he's on the Cleveland Browns. To be fair, Poteat has proven me wrong the past several years by filling in as a decent role player for the New England Patriots and the New York Jets. Poteat spent three years with Eric Mangini, but I wouldn't say his roster spot is a definite lock. He could inevitably end up being this season's Terry Cousin, if worst comes to worst.

I'd much rather have Daven Holly filling that role. Unfortunately, I haven't heard any reports about the Browns being interested in bringing him back. The latest reports have the Tampa Bay Buccaneers interested in Holly.

I'd have to imagine that under the new regime, signing players coming off injuries is a turnoff (see Sean Jones; Daven Holly). Ryan Tucker, also injury-prone, just had his contract restructured to stay with the team.

Finally, in other former Browns player news, CB Leigh Bodden is nearly going from worst to first after signing a one-year deal with the New England Patriots. Again, thanks for Shaun Rogers, Detroit.