Leadership Will be Missed With Release of WR Joe Jurevicius

Share All sharing options for: Leadership Will be Missed With Release of WR Joe Jurevicius 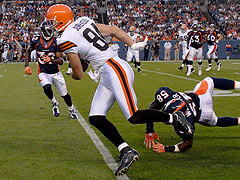 In a move that's both a surprise and not a surprise at the same time, the Cleveland Browns released veteran WR Joe Jurevicius earlier today. The Browns had this to say about the matter:

"These types of decisions are always difficult ones, especially with someone like Joe, who has meant a great deal to the Cleveland Browns organization and to the fans of Cleveland," said Browns General Manager George Kokinis.

"Eric (Mangini) and I have had extensive conversations with Joe and his representatives. In the end we were unable to reach an agreement that was in the best interests of both parties. We want to thank Joe for his contributions to the Browns and wish him the best of luck in the future."

Jurevicius had two solid seasons with the Browns. Although he missed all of last season, I think we'll all still miss his ability to bring leadership to the offense, as well as the security blanket he provided our quarterbacks on third downs.

After so many knee surgeries and roughly a $2.9 million contract due this year according to RotoWorld, the move isn't a complete surprise. However, I thought he would be given the chance to show the new staff he was ready to return. As of a few weeks ago, I believe there was a report released stating that Jurevicius was aiming to take part in a few team offseason exercises in the coming weeks. Apparently, this was not the case.

LeCharles Bentley. Gary Baxter. Joe Jurevicius. Why is it that when each player seems so close to a heart-warming comeback, they are released?

Does wide receiver become a higher priority in the draft now? I mean, it looks like we're going to keep Donte Stallworth, but we all know the story with him already after this past season.